I have photographed the Honda Center, FivePoint Amphitheatre, the Greek Theater, House of Blues of Anaheim & Las Vegas, the Joint at the Hard Rock Hotel in Vegas, the Hollywood Palladium, and countless other clubs and venues. I have had the great privilege of reviewing shows at these palaces of music. However, one venue in Los Angeles has evaded my grasp, and that is the famous Staples Center. Home of the Clippers, Lakers, and Kings, this fine establishment has been itching to get coverage from me. Well, on October 20th, Rockaholic and I had the chance to head there when progressive/avant-garde metal gods TOOL came on through. Having released their critical darling as well as commercially successful 5th album after 13 years of quietness, Fear Inoculum, TOOL looked to spread their artsy heavy metal once again. The Staples Center was the perfect place for it. Killing Joke was the opening act, but we unfortunately missed them.

After an announcement was made asking fans to refrain from photographing or taping any of the performance with their cellphones, the venue goes dark. During which, a lacey curtain is draped around the stage as TOOL walked out one by one. They kicked off the night with the self-titled song, “Fear Inoculum,” which the crowd went nuts for. As I suspected, enigmatic frontman Maynard James Keenan hopped between 2 platforms in the background belting his guts out, with no light surrounding him. With his hair in a spiked-up Mohawk style and clown make up to emulate the Joker, Maynard was full of mystery and abnormality. Guitarist Adam Jones wailed on the guitar with his extended solos and riffs, crossing boundaries between progressive and alternative metal. He is arguably a genius on the axe, showing off the many techniques he likes to use, never settling on just one. While Justin Chancellor layered in his groovy alternative basslicks, Danny Carey went on a rampage on the drums. TOOL gave their loyal fans a great mix of songs that took them to the cosmos. The curtain was eventually pulled back after the 4th song. In the background where 3 giant screens that played eclectic CGI and stop-motion animated videos that the group was known to put together for their music videos, adding the elements of wonder they have been known to bring.

Maynard was definitely fun and interesting to watch perform up there. He is not known for being a charismatic or wild frontman, but he makes it up with his oddity. During one of their songs (I want to say “Pneuma”), he took an unplugged amp from one platform to the other and just left it there out front, unplugged. We could not help ourselves but laugh it. When he was not on the microphone, he was singing into a bullhorn that he has swinging on his shoulder. It was an incredible evening with TOOL with exceptional songs like “Ænema,” “The Pot,” “Pneuma,” “Parabol,” “Parabola,” my favorite “Schism,” “Jambi,” “Vicarious,” “Intolerance,” and “Forty Six & 2.” After “Forty Six & 2,” they took a 12 minute intermission, where an actual timer on the screen counted down the minutes. Once refreshed, Carey emerged on stage to take us on a “Chocolate Chip Trip.” Jumping between the drums and synthesizer, he gives a revolutionary tune where progressive and alternative metal meets jazz, a genre he loves very much. My buddy Tricky Ricky calls the new album “Danny Carey’s coming out party,” and he was right. The rest of TOOL returned to stage to perform the classic tunes “Invincible” and “Stinkfest,” during which Maynard allowed the crowd to video and photograph the performance on their phones. Of course, everyone jumped at the chance to do it, including Rockaholic and myself.

It was my first time reviewing at the Staples Center, and TOOL was the best choice to debut there. They put together an excellent mixture of songs that came from Fear Inoculum and their classic records like Ænema, Lateralus, and 10,000 Days. They would play Staples Center the following night, where a picture has been shared around featuring a kid asked guitar legend Eddie Van Halen to take a picture of him with the background behind him, not even knowing who Van Halen was. LOL. I guess at any TOOL show, expect the unexpected. To TOOL, I salute you. Horns up!!! 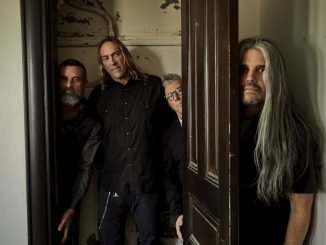