Let’s be honest, heavy metal would not even be around if it were not for the vision of one crazy frontman. This iron man from Birmingham, England changed rock ‘n’ roll forever when he and his band, Black Sabbath, looked to frighten the shit out of music lovers. I am, of course, talking about Ozzy Osbourne, aka the Godfather of Heavy Metal. For over 50 years, Ozzy has made us take a ride with him aboard the crazy train. Recently, he has had some setbacks pertaining to his health, having just announced that he has been diagnosed with Parkinson’s Disease. Alas, that has done nothing to stop the Prince of Darkness from putting together his first solo album in 10 years, Ordinary Man. The album title suits him because he was never an ordinary man, having created extraordinary records. Produced by the talented guitarist Andrew Watt (who also handles the guitar riffs), it features Chad Smith (Red Hot Chili Peppers) on drums and Duff McKagan (Guns N’ Roses) on bass. Now, let us see what this madman wrote in his musical diary for us now.

We kick things off with “Straight to Hell.” The angelic choir is harmonious on high, and we least expect it, that is when the insane riffs of Watt kick in. Ozzy portrays himself as an agent of the Devil, charming the listener to damnation. His sinister voice sizzles along with guest guitarist Slash’s wicked solo. Say your prayers, for Ozzy is here. “All My Life” is an ode to the vice-filled life the legendary rocker has lived. The verse has a pop rock melody that helps build up the song to the epic chorus. What made this song stand out were the anthem style solos Watt plays in the middle and the end. I have really enjoyed his guitar licks since first hearing him in California Breed. We come to “Goodbye,” a sludgy rock number that sounds like a throwback to his early Black Sabbath days. The singing Ozzy gives us is personal; full of torment. Smith’s simple, heavy pounding syncs nicely with Watt’s Tony Iommi style of playing. When we hit the bridge, the music takes a left turn to insanity, repeating that turn in the end. The self-titled track, “Ordinary Man,” is bittersweet to say the least. Ozzy teams up with Elton John, the Bitch himself, and they strangely go together really well. Hauntingly gorgeous, this piano rock ballad is pure genius. Question is: why haven’t they teamed up before?

“Under the Graveyard” is the 1st single and it helps Ozzy go into new terrains with his music. Alternative metal fused, this tune helps establish the partnership between the Prince of Darkness and Watt when we first heard it on November 8th. McKagan is a romping pleasure with his fuzzy bass lines. They all own the misery they put into this song. The moody harmonica and doom soaked bass lines introduce us to “Eat Me.” This tasty, meaty metal tune has a dash of psychedelic flavor. The lyrics are bit strange and cryptic, but worth digesting to appreciate the essence. “Today Is the End” is a sign that the apocalypse is upon us. Ozzy, in his menacing nature, warns us to run from the black sun that would engulf us. The buzz of the bass licks and guitar riffs kick tremendous ass. We now approach the alien friendly “Scary Little Green Men.” I have to admit, this is a funny written tune that makes us wonder if the truth is really out there. Rage Against the Machine guitar legend Tom Morello offers his unique, distorted riffs on the lead solo, making the song have a more sci-fi feel to it. Once you listen, you might become a believer.

I can see “Holy For Tonight” as a sort of love letter to the 1960s because the melody has that early rock sound that could come from the Rascals. Ozzy goes from ominous to cheery with a choir in the background. This song is an odd-ball choice, but it does contain a slick guitar solo, making it a little bit edgier. This song is a huge gamble, and I applaud him for taking a chance. “It’s a Raid” is an intense psychobilly number that has Post Malone on it. A huge fan of Ozzy’s, Post Malone cranks the music into override. Together, they accelerate my heart rate and have no intentions of slowing down. This song is passionate and extreme to the very last note. As a bonus, this album has the original Post Malone duet “Take What You Want,” which also includes rapper Travis Scott. The blend of hip-hop, R&B, and heavy metal is match made in Hell. While I do not particularly care for Scott, he does give it some soul. Post Malone and Ozzy is the new odd couple in music.

After 50 years, Ozzy is still barking at the moon. Ordinary Man is a roller-coaster of a record, with each song being more unique than the last one. Watt has generated a metal record that has summed up Ozzy’s life in one word: legendary. If this were to be his last album, I would glad it was this one because it shows he’s still the Prince of Darkness. Sick or not, the Godfather of Metal is will never fade away into the dark abyss. To Ozzy Osbourne, I salute you. Horns up!!! And…ALL ABOARD! HAHAHA!!! 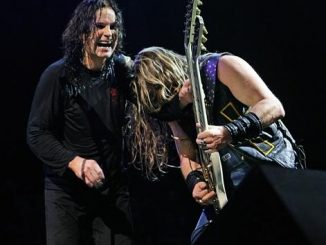