During a weekend at the NAMM Show, you never know who you are going to run into or you are going to talk to. I found that being at NAMM is one of the best places to be when conducting interviews. We (myself and the artist) are both in an environment that we feel comfortable in and we are surrounded by all this amazing musical products that stir up our mojos. One of the first interviews I conducted at this year’s NAMM was with Nick Mason, better known as the Living Dead Drummer. I first caught wind of him in the group Rhythm Coffin, wailing on the drum kit while donning monstrous make-up. When I heard he was available at NAMM on Friday, I had to grab that opportunity. Rabit and I met up with him at the Starbucks inside the Hilton Hotel, right next door to the convention. Over some coffee and hot chocolate, we got into it.

First thing I did was I called him the Living Drummer, which I later correct myself on, but Mason was good sport about it. He told me that he was been to NAMM at least 13 straight years, and cannot believe that he keeps coming on back. When I asked him what inspired him to be a drummer, he asked how long my new recorder’s batteries would last. Coming from long list of drummers that included grandfather, father, and uncle, he was introduced to drumming at a young age. However, he rebelled against it by taking up the saxophone, an instrument that I played in middle school. After that, tried of lagging around that heavy sax case (I know the feeling), he eventually went back to drums. He would go into great detail how the concept of how the Living Dead Drummer persona was born. Believe it or not, he debuted that character at a NAMM event that featured Beasto Blanco and Rob Zombie w/ John 5. He has been with the Rhythm Coffins since that day, helping put together drum tracks that Gruesome Gereg envisions for the tunes.

Nick calls the Rhythm Coffin “KISS meets Scooby-Doo.” His schedule was hectic for NAMM, with Friday reserved for interviews, Saturday for 2 performances in the Gibson room, and Sunday he gave presentation in one of the conference rooms. He would go on to tell us about his hotel room situation where Motel 6 refused to honor a discount price that was offered to him. It is safe to assume that he is never going back to any Motel 6 in the future. In terms of what he will be doing for the rest of the year, he has some work going on with the Rhythm Coffin as well as session gigs with other groups like Sticky Doll. His calendar gets booked up pretty quickly, which he has no complaints for. To cap off our interview, we went into a deep conversation about the differences between the Beatles and the Rolling Stones. When he was younger, he went with the Fab 4. When he got older and started playing, he started to appreciate the Stones more. This was probably the best in-depth discussion between to 2 iconic groups.

The interview took place in a Starbucks, where it was extremely packed, but the acoustics in there was perfect for our chat. Rabit even got to get in a few words with Nick. This was one of the best interviews I ever did. We even got to make fun of things Disney (please don’t sue, LOL). To Nick Mason, the Living Dead Drummer, I salute you. Horns up!!! And thanks for the hot chocolate. 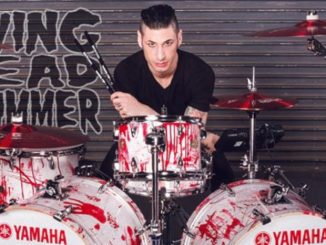 A Quarantined Collaboration Across the U.S. Featuring The Living Dead Drummer Nick Mason!