In 1994, the world was introduced to a new exhilarating and aggressive band from Oakland, Calif. Calling themselves Machine Head, they helped usher in a new wave of American heavy metal with Burn My Eyes. Full of rage, angst, and aggression, Burn My Eyes is one of the most quintessential metal albums to come out of the 1990s. 25 years later, it is still revered and talked about. Machine Head leader Robb Flynn then decided to celebrate the anniversary with the metal community by performing Burn My Eyes in its entirety, with most of the original members returning to play the album that helped define their legacy. With no openers joining them, it would be a 2 part event; 1st would be with the current line-up, then the 2nd act would feature the Burn My Eyes line-up. Their last stop on the tour was the House of Blues in Anaheim, so Rabit and I headed straight over there. Having been turned down by Machine Head before for coverage, it is a huge sigh of relief that they have finally accepted us.

As mentioned, there would be no openers on this tour. Just 100% pure Machine Head, and that sat very well with the metalheads of Anaheim. Stepping out onto the stage, the metal outlaws of Oakland kicked things into high gear, starting with “Imperium.” Flynn is a brute savage with his collection of “flying V’s” hanging around his neck. Wearing his trademark vest, he ravages our ears with sheering force. Bassist Jared MacEachern was guttural with his backing vocals and monstrous on the bass beats. It is our first time seeing the newest members, lead guitarist Wacław Kiełtyka (Decapitated) and drummer Matt Alston. Kiełtyka is crafty with the lead riffs, showing off his skills as a master guitarist especially during his solo number. He and Flynn played off each other’s strengths very well. Alston is razor sharp behind the kit, full of agility and power that is very much like the way Dave McClain played. Their set list for the 1st half of the show was a delightful mixture of different tunes from some of their most revered records over the years. From “Take My Scars” to “Beautiful Mourning,” “Locust,” “Aesthetics of Hate,” “Darkness Within,” “From This Day,” “Is There Anybody Out There?,” and “Halo,” the different styles of the group rang throughout the venue. Machine Head even went into a cover of the Iron Maiden classic “Hallowed Be Thy Name.” Once “Halo” was through, Flynn asked the crowd if they wanted more Machine Head. With a resounding “YES,” they retreated to back for a quick breather before returning to burn Anaheim’s eyes out.

First to come out was drummer Chris Kontos, who was with the group only for 2 years, but left his mark on Burn My Eyes. Once Flynn and MacEachern returned to the stage, following them was original guitarist Logan Mader. Buff and covered in righteous tattoos, Mader started in with the first riff of the 1st song, “Davidian.” Jumping around with the energy of a 20 year old, he never missed a beat with playing the iconic licks he co-wrote. Flynn continues to tango between the savagery and majesty of the vocals. All the while tearing through our eardrums with his blistering guitar hooks. Kontos battered the drums with his destructive and swift pounding. When the spotlight was on him, he ravaged the shit out of his solo. Amazing to see that after many years away, Kontos can be as bombastic as he was 25 years ago. Fans rejoiced in hearing the classic songs from the legendary recording like “A Thousand Lies,” “None but My Own,” “The Rage to Overcome,” “Death Church,” “A Nation on Fire,” “Blood for Blood,” and “I’m Your God Now.” Machine Head went into a musical mesh-up that had some of the best metal songs put together from artists like White Zombie and Slayer. When it was said and done, Flynn shouted to crowd “Fuck it all,” ending the night with “Block.”

Like I said before, Rabit and I were very pleased to finally cover Machine Head. We got the best of both worlds, the current line-up and the Burn My Eyes line-up. For both sets, I ran straight into the “circle of death,” continuously getting rammed into while hearing Machine Head in the background. I usually think that entering the mosh pit is a good catharsis to letting the stress and anger out positively. Slightly bruised and sore, we left the House of Blues feeling invincible. To Machine Head, I salute you. Horns up!!! 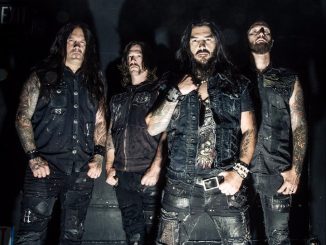 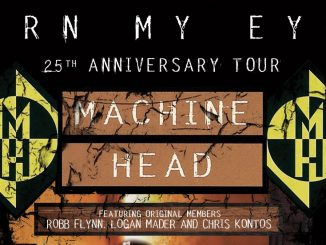