There is all this angry inside of me! Just like Jekyll and Hyde, Five Finger Death Punch certainly knows how to pull me under just to save my soul. The bad boys of Las Vegas have been monsters of rock for more than 15 years, showing fans how to live by the way of the fist. Recently, drummer and founding member Jeremy Spencer left the group for medical reasons, which is very heartbreaking, but we wish him all the best and hope he gets better. Fortunately, that has not stopped 5FPD from knee-chucking us in the gut with their 8th album, F8. Cocked and loaded with a new drummer, the band has putted together a record that guitarist Zoltan Bathory has described as the “rebirth” of the group. Let us listen in on F8 and experience the rebirth for ourselves.

After hearing the instrumental “F8” that builds up our senses, the first punch lands with the 1st single, “Inside Out.” Frontman Ivan Moody goes all in with his hollering screams, then goes melodic during the chorus. Letting the pain flow through him, this song is catharsis on dealing with his addictions and overcoming the demons that have lashed onto the band. Lead guitarist Jason Hook unleashes a blister-filled solo that would make Dimebag Darrell a little envious. “Full Circle” feels like a tune that takes aim at those who thrive on lies. Moody does not give a fuck for those guys, pointing out their true deceitfulness. New drummer Charlie Engen whammies it hard and fast on the double bass pedal. He shows tremendous will while pounding the snares with absolute strength. Hook and Bathory give the song arena-style riffs that could crack the walls at the Forum. “Living the Dream” is a mid-tempo pressure cooker that is layered with solid licks. Full of satire on our favorite superheroes from Captain America to Superman, Moody even takes a jab at the Queen of England. Hook paves the road with a sizzling lead riff that leaves a sweltering blaze behind him.

“A Little Bit Off” starts off with a simple acoustic guitar strum. This song represents a huge left turn for 5FDP because this is straight-up country rock. Most metal acts would fall on their face with something like this, but these guys pull off with allure. Moody is somber and touching with his tone-downed singing, showing another side of him. F8 goes into overdrive once more with “Bottom of the Top.” A destructive tune where Moody goes postal on his screams and Engen is very swift on the drums. I view this song as a statement to his critics to “fuck off” for the group’s approach to their records. Bathory and Hook cut their teeth into the searing riffs they created for this tune. Bombastic enough for the mosh pits. The alternative metal doors swing open with the superb “To Be Alone.” Bassist Chris Kael whips up some appetizing, funky bass riffs that make the song more monstrous. The highlight is yet another massive solo performed magnificently by Hook. “Mother May I (Tic Toc)” is a statement from Moody that he has come to terms with his fame. This is a slow cooker of a song that has a nice touch of groove metal in it, with a ripping guitar solo that makes the hair on my arm stand up.

“Darkness Settles In” brings out the melancholy mood of the group. This somber power ballad is Moody’s cry for help, but no help comes. It has powerful words in the chorus like “Waiting for someone to save me but everyone just runs away.” Emotional to its core. Armed with rapid-fire riffs, “This Is War” slays through ears like a hot knife piercing butter. Engen ignites all the pistons in body and accelerates his aggressive drumming technique. Alternative metal comes to bat with “Leave It All Behind.” During the verses, Moody busts out a rap flow that one would normally hear on a Linkin Park record. A tune about leaving the past behind, it contains a blistering solo that Hook saves for the end. “Scar Tissue” is the shortest track, packing a strong wallop at someone spreading lies while hiding behind a fake love. With vicious riffs and cunning lyrics, 5FDP do not hold back the anger in this tune. We have come to the end with the slow jam power ballad in “Brighter Side of Grey.” I see this track as very impactful because it is Moody’s declaration that he wants to be remembered for the good things about himself. Bathory is exceptional on the acoustic, while Hook finishes strong with his lead riffs.

Like the Phoenix tattoo on top of Moody’s head suggests for himself, Five Finger Death Punch is reborn into a new beast. F8 surpasses the band’s last 2 records, and their writing continues to evolve. The deluxe version of the album features 2 bonus songs, “Making Monsters” and “Death Punch Therapy,” that totally badass. Plus, there is a radio-edit version of “Inside Out.” No longer just a groove metal group, these 5 warriors are punching their way into new terrains. As long as their punch is resilient and brutal, they are not going anywhere. To Five Finger Death Punch, I salute you. Horns up, and fists in the air!!! 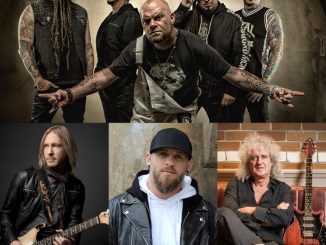 “Blue On Black” Collaboration With 5FDP, Brian May Of Queen, Brantley Gilbert And Kenny Wayne Shepherd Out Today; Proceeds From the Song To Benefit The Gary Sinise Foundation 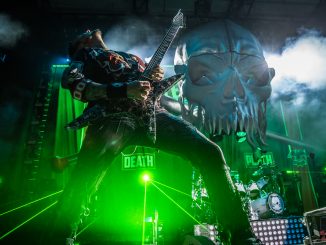 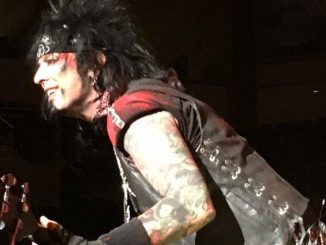