First of all, I just want to say this…FUCK THE CORONAVIRUS!!! This disease may be spreading quickly, but for us metalheads including myself, we refuse to give into the fear. The power of heavy metal fires up our spirits and resolve. DragonForce is the perfect band to keep our spirits alive and kicking. They have been leveling city after city, quenching every fans thirst for power metal with their latest offering, Extreme Power Metal. I caught them back in November, and I was so impressed with their show, I had to bring Rabit to their Los Angeles enactment at the Regent. Scaling with DragonForce on this tour including Canada’s Unleash the Archers and Austria’s Visions of Atlantis. Los Angeles was about to enter the highway to oblivion.

First up was symphonic powerhouse Visions of Atlantis. The name suggests beauty and mysticism surrounding the lost continent that sunk under water. They have been riding high with the release of their latest critical darling, Wanderers. Starting off the night with “The Deep & The Dark,” the frontman/frontwoman duo of Michele Guaitoli and Clémentine Delauney dazzled the crowd with their entrancing soprano vocals. Guitarist Christian Douscha enthralled the fans of the City of Angels with his classical style solos and harmonious riffs. Between Wanderers and The Deep & The Dark, Visions of Atlantis enriched our ears with tantalizing power metal tunes like “New Dawn,” “Heroes of the Dawn,” “A Life of Our Own,” “A Journey to Remember,” and the closer “Return to Lemuria.” Their best song of the night was “Nothing Lasts Forever” because Clémentine reminded us to live in the moment without fear. Truer words spoken. Visions of Atlantis was indeed a vision worth seeing.

Full Visions of Atlantis gallery below:

Following the Austrian symphonic driving force of Visions comes Canada’s heavy metal live wires Unleash the Archers. I have seen them a couple of years ago at the Tiki Bar in Costa Mesa, but I was too hammered to truly enjoy them. This time around, I was wide awake and was amazed by frontwoman Brittney Slayes’ thrilling voice. She can move mountains in Vancouver with her magnificent melodic singing. Between Grant Truesdell and Andrew Kingsley, they rage with their death metal style riffs that also have a melodic power flow in them. They also took turns showing off their death growls. Drummer Scott Buchanan had agile reflexes on the kit. Celebrating the release of their newest EP, Explorers, Unleash the Archers unleashed a slew of pile-driving tunes like “Awakening,” “The Matriarch,” “Soulbound,” “Northwest Passage,” “Ten Thousand Against One,” “Tonight We Ride,” and “Apex.” Like an apex predator, Unleash the Archers continue to hunt for new blood in the world. I am very eager to hear their next full-length album. Only then will I unleash my inner apex predator.

Full Unleash the Archers gallery below:

As the arcade game consoles have been unveiled on stage, a laser show fills the air. DragonForce walks out donning LED sunglasses, and got the party going again with “Highway to Oblivion.” Frontman Marc Hudson flies high on his falsetto vocals, giving each lyric an extra boost of adrenaline. There were times where he blasted the fans with smoke, courtesy of his one-of-a-kind CO2 gun. The true sorcerers of DragonForce were the shredding guitar twins Herman Li and Sam Totman. Strapped with their signature Ibanez guitars, Li and Totman exchanged blistering riffs and screeching solos that would appease the Power Metal Gods. They would even stand on top of the game consoles, which were playing different video game montages. Games I would play in the arcade when I was a kid. During the banjo/guitar solo dual, where Totman pluck away on the banjo with overalls, Animals as Leaders guitar wizard Tosin Absai and Polyphia master Tim Henson joined in, giving a stellar shredding display. Touring with DragonForce were drummer Aquiles Priester of Hanger and bassist Alicia Vigil from Vigil of War. Priester was whipping the floor with his rapid throbbing, while Vigil kept the bass simple enough to be in perfect sync with Li and Totman’s sharp licks. This was power metal to the extreme, with DragonForce chomping at the crowd with “Fury of the Storm,” “The Last Dragonborn,” “Ashes of the Dawn,” “Heart Demolition,” “Black Fire,” “Cry Thunder,” “Remembrance Day,” and “Valley of the Damned.” After a quick breather, they returned to fans demand for more. As encore, they surprised us with the already popular cover of Celine Dion’s “My Heart Will Go On.” The way DragonForce performs it makes Dion’s version sound a children’s sing-along. The set came to a close with “Through the Fire and Flames,” with paper streamers blasted out into the crowd.

DragonForce brought tremendous strength with their melodic power metal to the Regent. I would say this performance was way better than the one I saw in Santa Ana. Unleash the Archers took aim and hit nothing but bullseyes with their songs, while Visions of Atlantis conveyed symphonic beauty. If there was a good night to witness great power metal, this was the night. Fear was not in the room that night, and the metalheads of L.A. will never show it. To DragonForce, Unleash the Archers, and Visions of Atlantis, I salute you. Horns up!!! 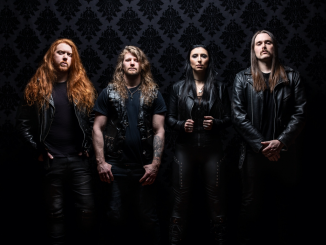 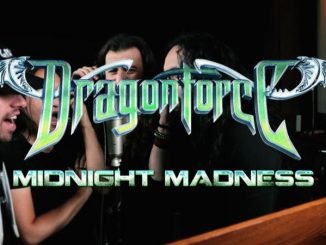 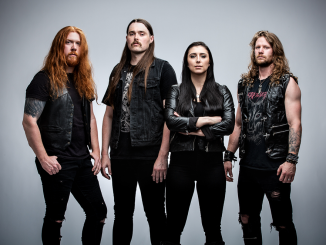