We got some real rock n roll vibes coming from the Rhode Island band PSYCLE. The band has been making music since 2016 but the success and talk about them got unleashed when they debuted the EP SURFACES in 2017. With solid, hard driven and melody driven music the album got them alot of attention locally and on the national level.
For the past year and half these guys have been putting blood sweat and tears into the newest creation a full length album due to drop in June of 2020.
If the sound that oozes out of the first single KILL THE MACHINE continues throughout the rest of the record I’m going to say PSYCLE will have another epic disc in there arsenal. Its thriving with that raw rock feel, electrifying, ballsy, driven and so much melody it makes you smile.
I had a chance to chat with Seth Salois vocalist and guitar player of the band and got into the single, the album and what he finds is important about the magic of music.

Q: Tell us a little about PSYCLE and what intrigued you about rock music that gave you the passion to start a band?

A: I was always a big music fan and growing up in a house with lots of different music definitely helped me as a kid. My parents were big music fans and their tasted varied so much from The Beatles to Elton John and Aerosmith. I think music helped me define who I was especially being very introverted when I was younger. It gave me a voice and let me be heard. It wasn’t until I picked up an instrument that I truly felt alive and able to speak my mind. I owe music my life.

Q: You just released a new single KILL THE MACHINE. A very driving all out-rock assault. How did this track come to life?

A:  This track was early on in the writing process of the album. I think we really wanted to define who we were as a band and our ability to strip it down as raw as we could. We have such a vast amount of influences and I think we felt so comfortable with each other creating a sound. Kill the Machine became the backbone of the whole album and I think once we wrote that song the rest of the album just flowed out. I think that track gave the album the voice we were looking for.

Q: You guys took a bit to write for this new track and album. What do you feel was your biggest growth in the songwriting process?

A: One thing that we wanted to do once we released our EP “Surfaces” in 2017, was to follow it up with a full album that felt like an album. We all grew up listening to albums and not just the latest single. We wanted an album front to back that had no filler and that each song could stand on its own. Our bass player Mike always says that you don’t truly know your song until you play it to the point it feels like a broken in pair of boots. I think that you have to be honest with yourself and make sure that there is no ego that affects the song. One thing that we pride ourselves on is making sure that everything we do services the song. For example, the first song on the record “King Without a Throne” was originally a fairly completed skeleton. When it was brought to rehearsal, the only part that we kept from the original was the pre-chorus part. Everything else was scrapped and for most people that would crack their ego. The song was so much better for it and that was all that matters. We are proud of every note on this album and I hope it shows once people hear the whole thing.

Q: You were quoted as saying your work ethic for the band is writing a better song than last. Do you guys look over the process of your older music and try to work on what you think are low points in the song or do you just attack new songs without thinking of the past?

A: This is a great question. I think that you are always learning from your past but you have to make sure that it doesn’t interfere in your future. Sometimes something that worked on an older song would never work on something newer and vice versa. I think that you can always grow and push yourself to be better than you were. One thing you have to be careful with is over-thinking or letting a song get away from you. A prime example of that is the song “Kill the Machine” Our drummer Jay has such a vast influence of metal, jazz, rock and punk music. He could have added a ton of cool fills and intricate patterns but you know what he did….he went full Phil Rudd on it and approached it as less is more. That is one of the reasons why I love playing with these guys is that it’s not about “Look at me”! It’s about what needs to be there.

Q: With another track being released may 5th what can you say about this newer single and how it’s different then KILL THE MACHINE?

A: Our new single out May 5th “Changing Tide” is very different than “Kill the Machine” We purposely did that to show people our diversity. It’s still a rock song and fits very well with the other songs on the album but it is a contrast to our first single. Changing Tide is a very emotional, deep and sweeping where “Kill the Machine” was very unforgiving, raw and pointed. I think that we wanted to show that energy can be created in many different ways and those two were polar opposites in that way.

Q: Will you be releasing a full length and when?

A: Our full length “Kill the Machine” will be out June 16th. I’m sure we will have another single with it but we haven’t gotten there yet. We can’t wait for everyone to hear to whole album together.

Q: What was the biggest lesson you learnt from Producer Chris Piquette?

A: I think that Chris really allowed us to be ourselves in the studio. It’s hard to hear that something you wrote, performed or created isn’t what it needs to be..yet. I loved the fact that when I was singing my tracks for the album, he pushed me extremely hard. It was never that it wasn’t good enough, it was always that it could be a better version of itself. We concentrated on the emotional aspect of it and not the technical side. Once we had the proper emotion we could always go back and capture the technical side of it. That allowed me to try many different things and find different head space for each performance. I think it breeds confidence in your performance and I hope that it comes across in what you will hear on the record

Q: Biggest influence in the rock world for you personally and why?

A: I have 2 and they play in the same band. Myles Kennedy ad Mark Tremonti from Alter Bridge. These two approach music and the business in such an amazing way. They are never satisfied and always working to better themselves. It amazes me to see interviews with them and they speak of these other artists that inspire them and make them want to be better. They have a thoughtfulness to them that is second to none and they truly appreciate every opportunity they get.

A: I always go back to the word “Hope”. I think our darkest times are when we feel alone, isolated even when we aren’t physically alone. I hope that our music inspires people to not feel alone even if it’s just one person who doesn’t feel like the darkness is their only friend. Music can be a guide for all of us do to the power it holds. That is why I take writing lyrics so seriously because it can have a lasting and profound affect on so many people in so many ways.

Q: Empower another artist by telling us someone u admire and why you admire them?

A: We had a chance to play with the guys in Blacktop Mojo and I admire those guys so much. They play music with the same emotion that we do. They are honest and were so good to us when we met. They are the ones who should carry the torch to show the way it should be done. I would jump on a show, a tour or anything with those guys. I hope they have all the success in the world. 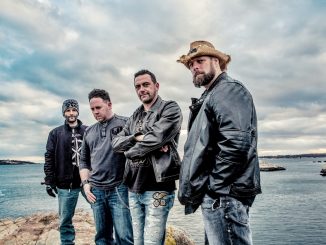 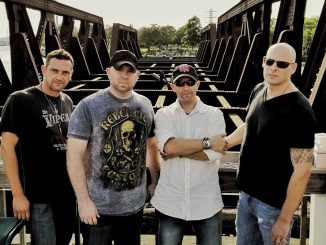