One of my all-time favorite movies to watch when I was a teenager was Pirates of the Caribbean: The Curse of the Black Pearl. I have always had a fascination with pirates ever since I was a kid because pirates, to me, were considered the first set of rock stars on the planet. They traveled the world, made millions in stolen lot, got drunk, and scored chicks, err I mean wenches. Add some guitars, drums, keyboards, and a bass, you got the heaviest rock band on the Seven Seas. Oh wait, we actually have one of those in Alestorm. Setting sail from Perth, Scotland, these 5 bilge rats are on a quest with their 6th album completed, The Curse of the Crystal Coconut. Fronted by Captain Christopher Bowes, with a bottle of rum in one hand and his keytar in the other, Alestorm look to plunder our ears new pirate metal tunes.

The sails are set as we begin with “Treasure Chest Party Quest.” Bowes has a snarly, gnarly way with his voice, bringing the pirate fun to the masses. Gareth Murdock brings chaotic booms to the bass the syncs nicely with the pulsating drum work of Peter Alcorn. “Fannybaws” pays homage to the scourge of the seas. Between Bowes keytar and Elliot Vernon’s keyboard, we get a little taste of progressive rock flavor. What captured me was the insane solo from guitarist Máté Bodor. This song spreads the disease that is so infectious, I do not want the cure. “Chomp Chomp” is a heavy number that features a blistering guitar riff. This tune is a stern warning to avoid crocodiles, or they’ll hate your freaking head. Mathias “Vreth” Lillmåns of Finntroll helps lend his voice, as pirate metalheads have to stick together. We now travel to “Tortuga,” a funky, jazzy rap rock number to honors the pirate haven. Captain Yarrface of Rumahoy lays his vicious rap flow over the brass section of trumpets of trombones. Guess I know where I’m going for my next vacation, to the sweet land of Tortuga.

“Zombies Ate My Pirate Ship” is a hilarious tale of the undead attacking Alestorm’s pirate ship in the dead of night. It has a slight R&B touch on the keyboards that plays nicely to the soft voice of Patty Gurdy from Patty Gurdy’s Circle. A fun little sea shanty where Vernon screams loud to kill the zombies. “Call of the Waves” is an arena rock style tune with a smoking solo Bodor conjures, and it is so wicked, Blackbeard would headbang to it from his grave. This is something Journey could put together. Bowes ventures the call with excellent harmony asking others to join him on the high seas. Now it is time to endure “Pirate’s Scorn.” The keytar melody in this song is so damn catchy, along with the quirky lyrics on never crossing a pirate the wrong way. Both the keytar and guitar join forces to play a snappy solo that convinces me to join the crew. “Shit Boat (No Fans)” is a wacky hard rock number shaming other pirate ships that do not belong to Alestorm.

“Pirate Metal Drinking Crew” is Alestorm’s anthem introducing themselves to their soon to be dead enemies. Bodor and Murdock go heavy, blistering, and thundering with the riff, like a march towards plundering. Violinist wench Ally Storch of Subway to Sally is heartfelt in her melody. The pirate metal drinking crew rules…and you suck! We now come to their epic saga of “Wooden Leg Part 2 (The Woodening),” where it features a video game style interlude. Alestorm goes all out on the dangerous waters of heavy metal, firing the canons with bombastic riffs, skull-crushing drum kicks, and gut-wrenching bass beats. Fernando Rey of Afterpain narrates along with Japanese Folk Metal’s Kaelhakase & Tatsuguchi. After a skillful guitar solo, Bowes swears to chop off his head, prompting the whole crew to chant “Wooden head!” The ship heads for land with this heavy, folksy closer “Henry Martin.” A bit slower than the rest, but a fitting end to a day of piracy.

It is time to crack open the bottles and barrels of rum, for Alestorm have captured the crystal coconut. The outlaws of Napalm Records have blasted away the metalheads with a barrel of whiskey and laughs. I really enjoy listening to this group. It is even more fitting that Curse of the Crystal Coconut drops just in time for the hot summer season ahead. Raise your glasses, and live for the party. To Alestorm, I salute you. Horns, swords and muskets up!!! 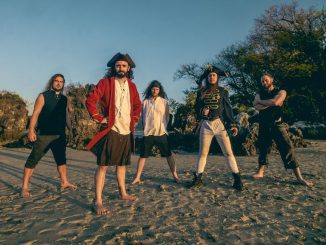 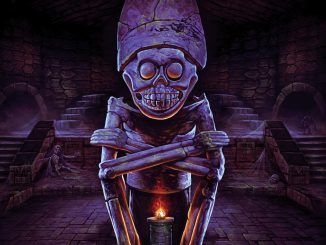