I always found cover albums to be interesting. It is unique to hear group or multiple artists jam out to their favorite track from one particular artist/band. It gives insight into how the said group influenced them, and they tackle the song they choose. On the other hand, mainly because it sounds pretty damn awesome. From Stryper to Halestorm and Metal Allegiance, they are constantly putting their own spin on tunes not written by them. Well, a new metal supergroup has emerged, and their first album together is a list of their favorite rock songs. They call themselves BPMD, as in Bobby Blitz (frontman) of Overkill, Mike Portnoy (drummer) of Dream Theater, Sons of Apollo and the Winery Dogs, Mark Menghi (bassist) of Metal Allegiance, and Phil Demmel (guitarist) of Machine Head. American Made is what they are bringing us courtesy of Napalm Records. Let us see how these covers compare to others.

Blitz cannot contain his excitement as he introduces Ted Nugent’s “Want Dang Sweet Poontang.” Right off the bat, BPMD turn the Motor City Madman’s song into a glorified thrash metal jam session. While Blitz scratches and screeches those sexy lyrics of Nugent, Demmel wails and whammies the shit out of the solo. Already, I can tell American Made is full of horsepower. Next up is one of my favorite Aerosmith rockers, “Toys in the Attic.” I love the rhythmic synergy of Menghi and Portnoy, churning a rockin’ beat provided by Tom Hamilton and Joey Kramer. With simple, straightforward lyrics, Blitz contains his usually beastly mode with a more melodic approach. He still takes a big bite out of this song. “Evil” is from Cactus, a song and group I never before (I know, shame on me). Originally created as a Chicago blues number written by Willie Dixon while performed by Howlin’ Wolf. Cactus gave it a heavy rock ‘n’ roll makeover, and now BPMD injected it with steroids. Menghi is stellar in that thunderous bass riff, channeling his inner blues swagger. Demmel is razor sharp of solo, making it sound sweet to the touch. All the while, Portnoy ravages the drumbeats with sheer force.

Menghi picks a beer rager with ZZ Top’s “Beer Drinkers & Hell Raisers.” BPMD grab this tune by the balls and showed Texas how to metal it up. Demmel nails the solo made famous by The Reverend Billy F. Gibbons solidly. Blitz and Menghi each trade vocal chops, making the song more potent. Grab a cold one, and cheers to ZZ Top. Now it is time to let your inner Lynyrd Skynyrd shine with “Saturday Night Special.” It is amazing how Blitz is able to control his range and hit those harmonious words Ronnie Van Zandt love to sing. Only difference, Blitz goes guttural, making it even tougher. Portnoy is pulsating with the beat that Artimus Pyle displayed when he joined Skynyrd. “Tattoo Vampire” is a special creature of the night courtesy of Blue

Öyster Cult. Ferocious and fearsome, BPMD highlight their thrash metal might on this tune. What stood out was that wicked spectacle Portnoy gives us on the kit. “D.O.A.” shreds melodic insanity for the supergroup. Made famous by Bloodrock, the original version has a more psychedelic doom metal feel. This version accelerates my heartbeat to the max.

“Walk Away” is a funk rock number produced by The James Gang. BPMD is almost faithful to the original tone of the song, but they add their destructive side to it. Menghi is funky to the bone, while Demmel lets Joe Walsh know whose boss on the guitar. This is one of my favorites cover off the entire album. They know attempt to climb the Mountain, taking a crack at “Never in My Life.” Full of heavy, cunning blues riff, Blitz soars high to capture the essence of Leslie West’s passion, with Demmel killing it on the riff and solo. The chop at the Mountain to crave a piece out for themselves with no apologies. This is the best song on American Made. The last song they chose to conquer is Grand Funk Railroad’s iconic “We’re An American Band.” A fitting choice given the name of the record, but this is not my favorite Grand Funk tune. I always felt they had better numbers like “I’m Your Captain (Closer to Home)” or “Time Machine,” plus I hated Don Brewer’s vocals. However, BPMD juiced it up and punched through the eardrums with ease.

American Made is 100% made for metalheads. Mastered beautifully by Blitz, Portnoy, Menghi, and Demmel, this turns each classic rock tune into monsters of metal. It is a risk venture to start the group out with a covers LP, but BPMD do not give a fuck! This is an album teenagers can crank up the volume to, and introduce them to the groups that made each song an instant classic. As far as cover albums go, American Made is made for you. To BPMD, I salute you. Horns up!!! 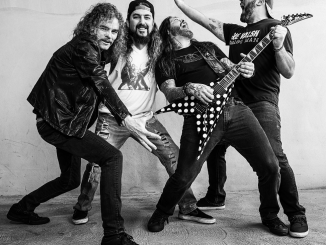