ORACLE came onto the Alabama scene in 2016 by a father/son combo who shared a love for all things metal! Trey and Ray Ozinga along with Jason Long formed the band to showcase the musicality and creative metal attributes they each had a passion for. What came from that passion is a truly unique metal assault that breathes heavy with groove a ton of epic passages and brutality at its finest that will get the attention of metalheads worldwide!
The band just released the 4th full length album entitled HINDSIGHT IS 2020 through Pavement Entertainment and I was able to find out a little more about this band and the musicians.

Q: Your band name comes from Greek History what does the meaning of ORACLE mean to you and how does it define the band?

A: As with most bands, we kicked around many names when forming the band. We decided on Oracle because of lack of genre specific sound and meaning. Our lyrical content can have many different messages and meanings that are important to us yet, many people can inject many different meanings upon and relate to them. Us, as a band and a bringer of these messages, only felt right.

Q: Trey and Ray are a father/son combo in the band how was growing up in a household that I would see as musically inclined and what have each of you learnt about each other being in a band?

A: We always had such a great common ground and goal with our lives that made life easy. Of corse, there were battles on certain topics but, we debated and grew in a positive healthy manor because of our common goals. Both of us bring such a unique trade to the band that works hand-in-hand.  Learning to let each other do what we are good at has been our largest lessons taught because we are a better overall product because of it.

Q: Where did you Find Jason and how has he influenced songwriter and pushing the band to new heights and growth?

A: Jason was in other bands in the past that we have had shows with. We first met him at a show that he was playing and we was impressed by his work. After a few years we three found ourselves at a crossroads of needing like minded people that worked hard and had open minds. He fits the bill and he influences song writing in a positive way for us and we all learn from each other.

Q: Since your inception in 2016 it seems like you have been releasing an album a year. Did you guys have a back log of stuff you had written before you got together or was the bond you had when you formed just songwriting coming easy?

A: Well, song writing never comes easy. There are times where it seems to fall out of you as if it already existed and just needed a medium in which to flow forth. We didnít have a back log of material as we wanted all of our influences to blend together to form a unique band. There was some prior written material on the ep but, no, itís important for us to write for the here and now and where we are. We wouldnít want to have to palette to paint a masterpiece and put out material that was created long before our palette had so many colors.

Q: You came out with a new record June 12th entitled HINDSIGHT 2020 on this album you guys are broadening your depth and creativity. How is that differing from past albums you have released?

A: This album seems to be a eureka moment in which all three of us knew how to speak out with solidity. We stripped some things off of the first two albumís approaches and made the third album, Seven Deadly Sins in an attempt to get to the roots of what we are good at and can grow from. That album was kind of a reboot for Oracle.

Q: I love THE CROW off the new disc. What was your inspiration for that track and do you consider this the platform song off the album and what was it about the track that made you know it was a release pre- release?

A:The message. The lyrics. We feel like people could really inject theirselves into that song because of the emotional roller coaster that modern social media and life in general can cause. We donít want the song to be considered a suicide song as much as killing the negative inside of your head and maybe in your own personal physical world. Jasonís wife battles with extreme depression and anxiety and he wanted her to simple talk about all of her feelings and emotions through all of it. He then took pages of her words and created the lyrics. We think this song personified the condition to where someone suffering could relate.

Q: You guys have a broad sound palette from death, thrash, black and nu metal aspects in your sound if you had to pick one genre you feel is the hardest to come up with ideas or sound patterns for which one would it be and how do you work out the kinks to come up with fresh sounds for it?

A: Honestly, we all have such a vast and eclectic background that the ideas arenít lacking. Working out the kinks come with perseverance and hard work. Making them work together and making music that is simply good is the real battle. But, itís a battle we take pride in and have a love for.

Q: If you could partner up with any other musician to collaborate on a song together who would it be and why?

A: I think it would be Mario Duplantier of Gojira because Trey is an outstanding drummer but, also a killer guitar player. There is nothing that couldnít be possible and thatís what is exciting about that thought.

Q: If you could only see one band live ever again what band would it be and why?

A: Avatar because they put on the simply best show we have ever witnessed and we have all seen them multiple times. Itís not only a musical masterpiece from front to back but, a spectacle for every band to aspire.

Q: What else is on the horizon for the band? And what social media platform is the best one to keep up to date on stuff with the band?

A: Due to so much chaos with the condition of the world at the moment and our love for creating music, itís a very simple answer. More music. Maybe better music. That is the goal. We do hope to get out on the road but, that is not in our hands at the moment. Until then, hit us up on all social media platforms and please go to YouTube and subscribe. Look us up on all of the media by typing Oracle extreme metal.

Q:   Any words of wisdom to your fans and the music community before I let you go?

A: Work hard. Be open minded and always remember; there is no failure if you keep trying. Thatís how you learn. The only failure is quitting on your dreams. That’s the only resolution of assuring the dream died and will not be obtained. 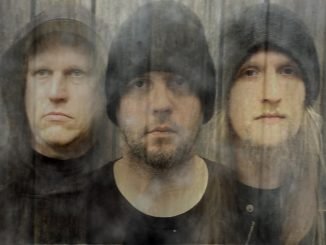