First of all, I would like to say it is an honour to be doing this Mike. How are you these days?
Mike IX: Thanks man! Things are fine, the pandemic has obviously slowed things down as far as touring, but we stay busy as fuck with side projects, recording, artwork, writing etc…

Tell us about growing up in New Orleans, and how that affected the music?

Mike IX: It’s not something that I can explain, if you’ve ever been to the city you know how strange it is. Every city has its own character, but NOLA is its own animal. I grew up in the punk scene since 1978 plus the influence of constant local music; blues and jazz etc… gives you an introduction to other cultures and styles at an early age. The almost constant summer there also influenced us; humidity, alcohol and sweat.
What were your earliest influences and when did you decide you wanted to be in a band?

Mike IX: I wanted to be in a band at 9 years old. Alice Cooper, Beatles, Stones, Sabbath and the Who were my first loves then Kiss and early Aerosmith took over everything in my young life. By 77 I was aware of the NY and UK punk scenes and went face first into anything I could find that was in that style; Sex Pistols, Clash, Ramones, Devo etc.. After that it was a free for all, I devoured everything. My older brother was into jazz and Billie Holiday, Keith Jarrett, Pharaoh Sanders so I got into that too. Reggae and Dub were in the mix also. From there on it has never ended. Motorhead, Venom, Witchfinder General and NWOBHM, crossover and thrash, post punk like Birthday Party, Scientists, Sonic Youth… I love the Dead Boys, Discharge, Testors, Pere Ubu, Laughing Hyenas, Germs, Kilslug, Flipper etc..

How/when did you and the band get together?

Mike IX:  In 1986 I was a roadie/merch guy for Jimmys old band Shell Shock, who were a local NOLA hardcore punk/metal band and he wanted to quit the band on that tour, and I wanted to start a new band since my band Suffocation by Filth had broken up. Our love of Obsessed, Confessor, St. Vitus, Pentagram, Melvins, Corrosion of Conformity, Black Flag led us in the direction of that style, and it began from there.

Was it hard to get gigs in the early days?

Mike IX: Not at all, we just opened for friends’ bands who were mostly thrash metal and hardcore bands. No one was doing what we were doing at that time in New Orleans. We did a few out of town shows, but mostly people hated us.

What was it like recording In the Name of Suffering?

Mike IX: 800 bucks for the studio and 200 bucks for beer and marijuana. We were completely clueless about being in that studio. It was recorded live with no over dubs.

Were you pleased with how it was received?

Mike IX: Was it received? Some people seemed to dig it, but the biggest reaction was abject revulsion. Playing slow was not “cool’ at that time and all the hip assholes didn’t get it. We loved the negative attention. Fuck the trends.

The second album Take as Needed for Pain is one of my favourites, was it a conscious decision to make this record different?

Mike IX: No, it was a natural progression. We were just playing what we wanted to hear. We were listening to a lot of bands like Soundgarden, Carnivore, early Janes Addiction and of course the Melvins besides the usual stuff.

Mike IX: It was recorded on the 13th floor of an abandoned building in the French Quarter that once held a local shopping center. The studio was the only business in the building. We recorded all the instruments separately as we did the vocals. We took the recording a bit more seriously as well as the songwriting.

For the next record Dopesick, how did this come together?

Mike IX:  I was living in Brooklyn at that time and took a Greyhound back and forth to New Orleans for the writing and recording. We didn’t give a fuck about anything before this and especially during this one.., it was a majorly drug and booze fueled time in our lives.

Were you picking up more fans on this tour?

Mike IX: I suppose. We toured with Pantera and White Zombie for this record as well as our own headlining jaunts.

As I understand you went on a little hiatus from 98-2000 before releasing Confederacy of Ruined Lives, can you tell us a bit about this time period?

Mike IX: That is false. At the beginning of 2000 we took about a 6-month break because of record label bullshit, substance abuse issues etc… Nothing was solved by that by the way hahaha
Tell me about the release of the self-titled record and how it was received?
Mike IX: It was our first full length album in 13 years although we had put out a lot of splits and 7’s with various labels in the interim.

You also underwent a liver transplant, that must have been terrifying. How has that affected you?

Mike IX: Death is just another part of life. I was a goner and through modern medicine I am alive today. It changed my view on life and makes you take a second look at suicide and mortality.

What is next for Eyehategod and any other projects you’re working on?

Mike IX: The new EHG full length is finished recording and will be out next year on Century Media. This year I’ve worked with the great band Ho99o9 on their latest mixtape, done a band with Poison Idea drummer Steve “Thee Slayer Hippy” Hanford and Nick Oliveri (Queens of the Stone Age, Dwarves) and others, entitled Dead End America and our 7″ is out now on Southern Lord records. Steve sadly passed away before the record was finished.
I’m re-printing my book Cancer as a Social Activity this year and also there is a compilation of experimental/noise covers of all my bands (EHG, Outlaw Order, Arson Anthem, The Guilt of…, Corrections House) put out by Industrial Coast. EyeHateGod also has a split 7″ of cover songs with Sheer Terror coming out on our new label Take as Needed Records
What do you love about music?
Mike IX: Everything. Music is subjective .

What is the craziest thing you’ve experienced being a singer in a metal band?

Is there anything else you’d like to say to your fans?

Mike IX: Thanks Andy for the interview!
Buy our new album when it’s out and keep in touch on our social media sites Facebook (official Eyehategod) and Instagram (eyehategodnola) plus my personal IG site @southernihilismfont or Mike IX Williams on FB… We have TONS of merchandise available with global shipping at: Eyehategod.ee so please help keep us afloat during this pandemic and time of no touring and check out our new designs.
Fight the System, Fight Back!! 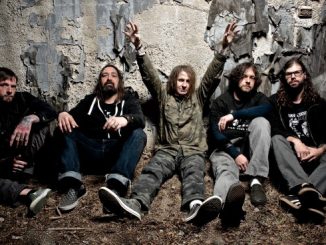 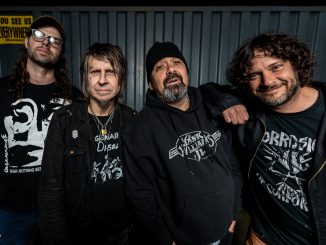