Typical when you think of great guitarists that have come out of Australia, one would automatically go with Angus and Malcolm Young of AC/DC, Ian Moss of Cold Chisel, Chris Cheney of The Living End, or Tim Fariss of INXS. There is one out there who also stands tall with the big boys, and that is Orianthi. The blonde guitar vixen, who can go toe-to-toe with “Hurricane” Nita Strauss, is a completely different typhoon altogether. Debuting to the world at the 2009 Grammy Awards as Carrie Underwood’s guitarist, Orianthi would go on to make a bigger splash as she was handpicked by Michael Jackson to be his guitarist for his ill-fated This Is It tour. Since then, she has toured with the likes of Rock ‘N’ Roll Hall of Famer Alice Cooper, Richie Sambora, American Idol’s James Durbin, Michael Bolton, and Dave Stewart. Orianthi is now back on the solo circuit with her 4th release, and 1st with Frontiers Records, simple titled O. I would imagine O means not only her name, but also “O, my God! Listen to what I created.” As this is her first album in 7 years, let us frontier into her evolving sound.

The album gets going with “Contagious.” A tune with crunchy riffs and simple bass lines, Orianthi tackles the issue of hatred, and how it is contagious for everyone. She whips out a blistering solo drives the song home, especially on the wailing sections. She whammies the shit out of the whammy bar. “Sinners Hymn” screeches with an electronic intro that made me shiver. The simple two beat drumming of Evan Frederiksen give the song a mightier swing for the fences. Orianthi is so subtle with her style of singing, but her old school, 70s flavored solo caught my ear by surprise. Dubbed her most anticipated track off O, I can hear why. “Rescue Me” shows off her more blues-infused side. It is a typical heartbreak song where she brings a twang sound out her guitar. Smoldering licks compliment the claps during the main riff. This solo she puts out is slow burning and emotional. We now come to “Blow,” where there is a bit of a pop aroma. Evan is steady with the bass, consistent yet impactful. Orianthi keeps her voice in check with a slight sexy quality to it. “Sorry” brings some hip-hop flair to her rocker style. This song is dripping with passion and guttural pain. Her solo is very Van Halen oriented, and she nails it to where Eddie Van Halen is grinning from Heaven.

Halfway through, and Orianthi gets personal with “Crawling Out The Dark.” A ballad wrapped up in her pain, you can feel her agony with her voice. Featuring no bass or drums, Orianthi sways our ears with her Texas Blues like licks. This is one of my personal favorites. “Impulsive” supercharges our senses again with 60s style sound. The distortion coming out of her axe is so tenacious. Where she gets her inspiration for her lyrics is beyond me. “Streams Of Consciousness” pays homage to the filthy yet glamourous side of LA rock. Though it is a warning, Orianthi cannot help but be drawn into this world, taking us with her. Her sick solo is pure GNR like, slick yet dominant. “Company” is another hip-hop oriented song layered slightly with electronica. Not always a hit with me, yet Orianthi somehow makes it work with her delicate tactic. What she does during her solo is intriguing, as if she is somewhat channeling her inner Tom Morello. We come to her last song, “Moonwalker.” This is an interesting choice to close out O because has a New Age feel to it. It is like Enya decided to pick up a guitar and rock out. Orianthi goes all out with a Queen style riff that is tasteful and mystic.

Produced and programmed masterfully by Evan’s brother Marti, O is one of Orianthi’s most ambitious records she has ever created. Each song has a different sub-genre mixed into her guitar work, and for the most part, they go together nicely. Signing with Frontier’s Records has given her sound a much-needed kick in the ass. It is no wonder Alice Cooper and Michael Jackson wanted to work with her, as her style and musicianship is amazing. Australia is proud to unleash her to the world. To Orianthi, I salute you. Horns up!!! 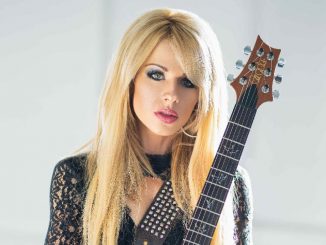