All I have to is Thank Dio for Skype. There are many great bands of the metal genre, and a lot of them, unfortunately, are across the sea. In addition, new ones are merging onto the scene. If it were not for Skype, Zoom or whatever, chatting with these gifted artists would be damn near impossible, especially with COVID-19 still out there. One such group is looking to take the symphonic metal bull by the horns and bring it to its knees with a melodic touch. They call themselves as Surma, the brainchild of songstress Viktorie Surmøvá. With the tenderness of Viktorie’s voice and the powerful stride of her guitarist partner-in-music Heri Joensen, Surma has released their debut album with Metal Blade Records, The Light Within. Back in October, I had the good fortune of having a Skype chat with Viktorie, so as I mentioned, Thank Dio for Skype.

The name, Surma, is inspired by her surname, but she Googled the name and it has a list of different meanings, a couple of which means “death.” When I asked her what she thinks it means on a personal level, she says it means her family, which is a cool reason. She got into metal a young age when her parents would play different groups to get her to go to sleep. According to Viktorie, she got together with Heri around 2016, and around 2017 (when her current group was on hiatus), he encouraged her to start recording and Surma was born. We would discuss about the process of creating The Light Within, and why she wanted the album to bring positive feelings against the darkness around us. The song that I was interested in learning about was “Until It Rains Again,” and Viktorie gave a very insightful answer. That song along with “Downfall” were favorites to work on.

So far, I have really enjoyed The Light Within and the message it sends to the listeners. Viktorie was an absolute pleasure to have a chat with. A good sport throughout the conversation, I thought she had fun when I asked her about what three albums she would bring with her on a dessert island. She even brought in Heri who was in the next room, and that was a fun little bonus to have. I look forward to seeing her and Surma coming to the States once the pandemic is over, spreading the light to us. To Viktorie Surmøvá, I salute you. Horns up!!! 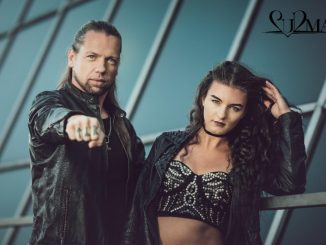