It is extremely frustrating not being able to go to live shows because of this stupid pandemic. To be inside a venue, feeling the music flow through you live, and being crushed by screaming fans is a feeling like no other. We are all aching to return to that world once this crisis ends and the politicians get their egotistic heads out of their asses. Alas, bands have found a way to spread their vibrant energy to the fans; live streams online. Metal bands have been posting on their social media pages that fans can watch a live performance online, and so far from what I am hearing, it has been successful and therapeutic. Wrestling icon and metal basher Chris Jericho did just that with his group Fozzy this past weekend. Invited to check it out, I thought might as well give the mighty Fozzy all my attention and admiration, even though I do prefer the real deal at an actual venue.

When I clicked into veep.com, the stream started with a 30-minute documentary about Fozzy’s last tour for the 2017 album, Judas. What made this documentary special was that it showed the group attempting to do three shows in three different states in one day. They performed one show in the morning in Florida, fly to Texas for the afternoon (via private jet), and wrap it up for the evening in Sin City herself, Las Vegas. It was cool to see their legion of fans coming to see them put on amazing performances back-to-back-back. In between sets, they would talk to the cameras about life on the road and how they have been able to make it this far. Talk about dedication, for Jericho and his crew lived for this shit.

Following the little documentary, the mighty Fozzy took center stage inside a studio the band were spread out in the room, as per suggested by the CDC (aka Concert Destroying Communists), kicking things off with “Sin and Bones.” Jericho led the charge with his scorching vocals while his longtime partner-in-metal, lead guitarist Rich “Duke” Ward, brazened the axe with extreme passion. Rounding out the group was rhythm guitarist Billy Grey, drummer Frank Fontsere, and bassist Randy Drake. Members had a mini camera attached to either a mic stand or the ground in front of them, and one cinematographer was in the center capturing the rock ‘n’ roll magic going on. Fozzy played a slew of pulsating, adrenaline-rush tunes filled with hard rock and heavy metal splendor.

In between the songs, the group would chat about life as a band, the tours they have had, the inspirations for their songs, and hanging with fans that just loved. Most of their set list came from Judas, with a few thrown in from Sin and Bones (2012) and Do You Wanna Star a War (2014). From “Drinking With Jesus” to “Burn Me Out,” “Elevator,” “Lights Go Out,” “Painless,” “Wolves At Bay,” “Enemy,” and “Sandpaper,” Fozzy was merciless. They even performed their newest song “Nowhere to Run,” which is set to appear on their new record (out sometime next year). They capped off the stream with the all-time classic, “Judas,” at which point Jericho thank the viewers and promises to see them in the flesh once again. That is something we look forward to seeing once again.

This was actually my first live stream of a band, and it was not too disappointing. Though it does suck to watch Fozzy off my iPad, they made the most of it and made sure I was headbanging the whole time (which I was). The madness was pleasurable to witness, and Jericho continues to prove that he is the “Ayatollah of Rock ‘n’ Rolla!” All the photos taken came from my phone, and they surprisingly turned out pretty good. The live stream will be available through November 29th, and for only $10, fans can experience it at FOZZY.veeps.com. Log in, and go mad yourself. To Fozzy, I salute you. Horns up!!! 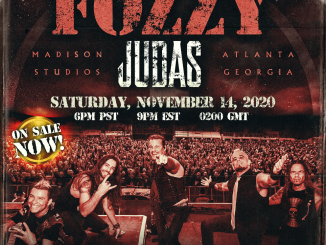 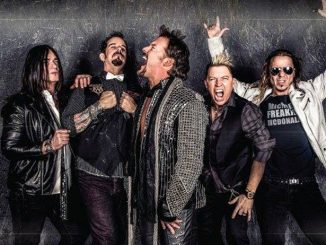