Brazil has one of the biggest and most thriving fan bases in heavy metal. When I watched the Iron Maiden documentary Iron Maiden: Flight 666, I was amazed to see the thousands upon thousands of screaming Brazilian metalheads. From São Paulo to Rio de Janerio, they came from all over the country to bang their heads fiercely. Most of the citizens do not speak English, but they do know the words to songs such as “Run to the Hills” and “Hallowed Be Thy Name.” Brazil also produced some of heavy metal’s finest acts, including the crossover groove/thrash metal giants, Sepultura. Another Brazilian band that has been around since 2010 and are just now appearing on my radar is Nervosa. The all-girl thrash metal powerhouse from São Paulo has been on a tear for the better part of a decade. Recently, two core members left the group, leaving guitarist Prika Amaral the only original member around. Instead of calling it quits, she recruited new soldiers into Nervosa, who then deliver their 4th album with Napalm Records, Perpetual Chaos.

Chaos erupts in the first track, “Venomous.” Frontwoman and screamer Diva Satanica is vicious on the mic. Every word coming out of her mouth is every bit ferocious. Drummer Eleni Nota is off the radar with her rapid double bass kicks. “Guided By Evil” starts with Amaral riffing a sinister lick that has a touch of doom metal. Satanica tackles the screams and snarling growls with sheer tenacity, as if the forces of darkness are guiding her to the promise land. Bassist Mia Wallace goes postal on the blast beats with Nota. Destructive forces are brewing as I listen to “People of the Abyss.” Nervosa channel their inner Slayer and slash through every ear canals that dare to listen this wretched thrasher. Nota is in full Dave Lombardo mode, while Satanica puts so much rage in voice. Very well designed lyrics that deals with the wicked and what awaits them in the afterlife. We reach the self-titled track, “Perpetual Chaos,” where it is not as anarchic as the previous tune, but it is still vicious in its nature with a smoldering overtone. Influenced by the groove melodies heard from Pantera, Amaral’s solo did it for me with this song, reminding me of what the late Dimebag Darrell would play.

“Until The Very End” returns Nervosa to the destruction they love to cause. The song deals with suicide and seeking help to overcome it. It is awesome to see groups tackle topics like this that are still affecting so many people today. The swift musicianship and hellacious guitar solo is pure Overkill. “Genocidal Command” gives the middle finger to total-authoritarian rule that thrives on enslaving and killing its own people. Satanica snarls like a beast on the mic, while Amaral continues to kick down doors with intense guitar playing that is very exuberant. We are halfway through Perpetual Chaos as we come to “Kings of Domination.” From what I can gather, the lyrics deal with cruelty of animals in slaughterhouses. This is an interesting topic to focus on, though it is just a tad preachy. Well written with clever metaphors and allegories, Nervosa slays the music vigorously. “Time to Fight” is an obvious cry for revolt against the oppressors of society. Amaral, Wallace, and Nota go into rapid-fire mode with the main riff that sears in my ears, while Satanica erupts on the mic. One of their shorter numbers, this song hits home for many who feel authority has wronged them. Up next is “Godless Prisoner,” a death metal number where false prophets are attacked. I really enjoyed hearing that “da-da-da-dadadada” breakdown Nervosa attempts after each main verse. Amaral perform a short but poignant solo towards the end.

“Blood Eagle” has a creepy intro that sets up the doom/death metal melody Nervosa is going for in this song. The tempo slows down a bit to help provide the words its nasty edge. I loved Wallace’s simple yet rousing bass notes. “Rebel Soul” feels a little too cliché in a sense of rebellion. I felt they already accomplished that subject with “Genocidal Command.” With that said, it is still a killer song and I enjoyed the guest vocals in the pre-chorus by Erik A.K. of Flotsam and Jetsam. “Punished By Judgement” is a big improvement over the last tune. Nota bombasts the shit out of her drums while Amaral blisters out a kick ass melody and solo. Satanica continues to knock me on my ass with her powerhouse screams that pummels injustice to a bloody corpse. We come to the final track, “Under Ruins.” The mid-tempo intro helped build up the song’s upcoming fiery thrash quality. Satanica goes back and forth between her high pitch screams and low, deathly growls. Amaral digs deep into her arsenal, and unleashes a powerful riff that James Hetfield would kill to have. This is a solid number to finish with.

Most bands that lose some of their key members would pack it in and go home, but others would march forward and seek new blood. That is what Nervosa accomplished with Perpetual Chaos. Amaral found new sisters that helped deliver the group’s most pulsating album to date. Satanica, Wallace, and Nota help breathe new life into the group as they continue to spread Brazilian metal pride to the masses. Thank you Brazil for your metal loyalists and bands. With the world in a chaotic state right now, these women of metal know how to navigate it on the right path. To Nervosa, I salute you. Horns up!!! 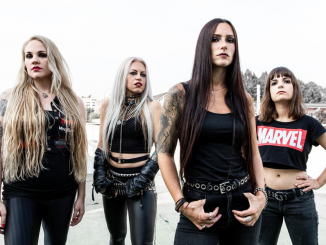 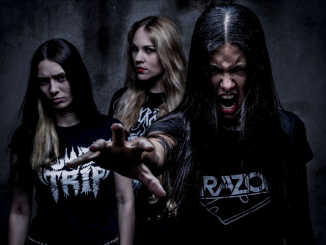