Everyone is addicted to excitement. That feeling you get when meeting someone new or experiencing something for the first time is the closest to a pure high most of us will ever enjoy. You can spend your whole life chasing it – despite knowing it’s fleeting. Keeping Rock N’ Roll alive with a steady stream of upbeat and fun songs, Moon Fever continues to demand an audience with their new release “Cheap Thrills.” The single is now available worldwide.

The driving stomper of a song touches on a wide array of events, moments, and things that can give you that temporary high, and in doing so, provides a perfect soundtrack for your next adventure. The accompanying animated video uses a backdrop of the Sunset Strip and other Hollywood landmarks from their adopted home of Los Angeles to get their point across.

Speaking to the single, Moon Fever guitarist Mitch Micoley says, “Cheap Thrills’ is a song about the kind of thrills that happen and then are gone in a flash, leaving you wanting some more. It’s open to interpretation – the thrill of a certain person you meet, a drug, your favorite libation, a comfort food – or a song.”

He continues, “I had some original musical ideas and after a few nights out on the town in Los Angeles our singer Cody Jasper came up with the hook “Red Yellow Green Purple pills… All I want are Cheap Thrills.” We came up with a fast-paced rocker, which our producer Jim Kaufman (The Black Moods, Danny Worsnop, Night Riots) helped turn into a banger that we hope a lot of fans can relate to.”

“Cheap Thrills” is the band’s 6th single and follow up to “Cocaine” – which is their biggest song to date and has accumulated more than 500,000 cumulative plays with prime placements on Key playlists at Spotify, Apple Music, Amazon Music, Pandora and other major streaming services. Previous release ‘Undertaker’ was a hit during the Halloween season with its Voodoo themed video. Predecessor ‘Shaking Off The Evil’ received widespread critical acclaim from Alternative Press, Medium, All Access and other media outlets. “Fever” and “Casanova” are helping the band build a solid catalog of music. Moon Fever just wrapped up a sold-out run opening for BuckCherry, with more live dates being announced soon. The band will be releasing an EP at the end of April. 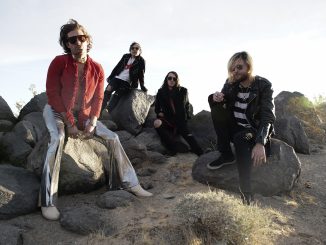