When it comes to promoting new and exciting metal bands, no one does it better than the Metal Ambassador Jose Mangin. The famed radio DJ (Sirius XMs Liquid Metal and Octane) really gets you excited for young talent he feels have the drive to become future heavy metal icons. It is because of him I follow artists like Spiritbox, Hyro the Hero, Code Orange, and Alien Weaponry. I enjoy listening to all of these artists that breathe new life into heavy metal, but the one group I truly get a kick out of that Mangin constantly praises is Tetrarch. Formed in Atlanta, Geo., this 4-piece outfit bring explosive energy to metalcore and nu metal. Founded when they were in middle school, they consist of frontman/2nd guitarist Josh Fore, lead guitarist Diamond Rowe, bassist Ryan Lerner, and drummer Ruben Limas. In 2017, they made their presence known with their self-released debut, Freak. Since then, they signed with Napalm Records and just released their sophomore effort, Unstable. Like a powder keg, Tetrarch is ready to explode once again, so let us get into it.

Unstable starts with “I’m Not Right.” First released in May 2020, this song is a grand reintroduction of the band to the metalheads. Fore sings in a sinister, howling voice as he tries to conquer depression and anger. Diamond is explosive as she wails on the riffs along with Fore. “Negative Noise” is Tetrarch’s newest single. Right off the bat, they blow me away with the scorching riffs Diamond and Fore perform. Diamond gets the chance to show off her solo skills, honing her skills as if Eddie Van Halen and Dimebag Darrell are guiding her. Limas is swift and fiery behind kit while Lerner puts a flawless bass groove to the beat. We now come to the self-titled track, “Unstable.” Alternative metal and metalcore duke it out. Fore is a snarling psycho as he sings about fighting and getting the upper hand on his enemies. I really like how he bellows to the top of his lungs “I don’t give a fuck!” This song is full of much needed rebellion and angst, something Tetrarch knows all too well. “You Never Listen” has a real heavy groove, but the tempo is mellower than the previous tracks. While it is more relaxed, it can still kick your ass, as the riffs Diamond executes are powerful. Fore digs deep to express his heartache as well as frustration. Lyrically, the words penned for this song are poignant. “Sick of You” has Tetrarch go postal once again. Diamond elevates the melodies to new heights on the main riff. Her solo is one of the best she has performed thus far. This is a standalone song for me.

Halfway through Unstable, and we approach “Take a Look Inside.” I love the message Tetrarch presents in this tune: you have to help yourself overcome the obstacles in front of you. Fore says it best, “So full of excuses please stop with the lies.” On the last verse, the band goes Lamb of God as Fore ravages the shit out the microphone, which is a nice twist. “Stitch Me Up” cranks up the nu metal sound to 11. Fore sounds like Chester Bennington if he was in a full-blown rage. Diamond continues to astound me with her blazing hooks and wailing solos that would put Mark Morton to shame. “Addicted” hits hard on the subject of addiction. The song feels like the protagonist is in the middle of an intervention, and he tells them he loves this feeling. Diamond goes off the walls with her solo as she sears the strings with all her strength. For anyone who knows this feeling, this will certainly hit close to home. “Pushed Down” is a beast that metalcore fans will embrace with pride. The sound has the allure of classic Linkin’ Park, as Fore restrains is voice to sound more like Chester again. While this tune does not offer anything new, it still enough to crush skulls. Tetrarch wraps up their album with “Trust Me.” Things take an interesting turn as the group slows down and go Gothic. Lerner and Limas offer the beat a doom makeover, with Fore sounding eerier than before. Diamond plays at haunting, hypersonic levels with the licks. This a daring move that shows a new side of the band.

The world has become so unstable right now, and Tetrarch made more of that with Unstable. The group is coming into their own and sounding better with each new song they create. This album tackles the subjects that everyone is dealing with right now, and I believe they will relate to certain songs in their life. I see Diamond on her way to becoming a guitar hero that this genre has been missing and Fore with his menacing voice could become the next Rob Zombie or Jonathan Davis. If you are looking stability, then go look somewhere else because this album is anything but stable, and we approve it. To Tetrarch, I salute you. Horns up!!! 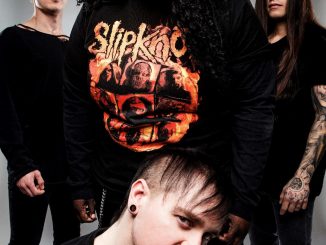