Let’s say you take 2 members of a ferocious thrash metal, add a second guitarist from a metal folklore group, and a lead guitarist from a coven that has vast knowledge in heavy metal. Bring all four bad girls of metal together, and you have yourself Crypta. Started by Burning Witches’ Sonia Anubis along with Nervosa’s Luana Dametto and Fernanda Lira, Crypta looks to take no prisoners with their brand of melodic death metal. They later linked up with Hagbard guitarist Tainá Bergamaschi to complete their deadly lineup. During the lockdown, they have been hard at work with their debut album under the Napalm Records banner. Finally ready, Crypta brings to us Echoes of the Soul. According to my interview with Sonia, she said that the album’s theme is death. A fitting concept for a death metal record. Let us enter the crypts and hear the ferocity that is Crypta.

Echoes of the Soul starts off with “Awakening.” This interlude has dripping water, rattling chains, and an axe being dragged on the floor. Next thing you know, we come to “Starvation.” Fernanda’s ferocious singing reaches the blackest part of her soul. The lyrics she concocts deals with death from starvation. Luana is swift on the drums while Sonia adds this arena soaked solo. It fits with the beat nicely. “Possessed” adds a bit of doom metal into the death metal machine Crypta is creating. Tainá plays a wicked rhythm part that goes along with Fernanda’s sinister bass playing. Sonia is very flamboyant with her solo as she is as fast as lightning. Luana crosses the boundaries between booming and velocity on the kit. “Death Arcana” is a mecca for death metal fans. The viciousness of each woman’s playing is unparalleled. Fernanda is an Angle of death as she snarls with conviction. I love how low she goes with her growls. Tainá and Sonia make a fatal pair on the axes. Sonia is a tap-dancing machine on her guitar as she walks up and down the frets. “Shadows Within” is disturbing to the bone. Menacing in every sense of the word, Crypta tells us to embrace the shadow we all possess. The wailing of Sonia’s licks is stellar. This song is the stuff nightmares are made of.

We come to the halfway point of the album as Crypta presents “Under the Black Wings.” Low horns signal that evil is near. The tempo is toned down, and it is a nice change in pace. Fernanda is beast on the mic, but it is her low bass notes that strike a good chord with me. Wretchedness fills the air as Tainá tears flesh off her fingers while shredding. “Kali” pays homage to Hindu Goddess of Death. The lyrics is like a plea to hear to destroy the lies and illusions that plague our world. This is one my favorite drumming by Luana as she is influenced by another entity. Sonia and Tainá come together to perform a baleful riff, while Sonia wails to the moon with her solo. “Blood Stained Heritage” is extreme metal at its finest. The lethal dosage of bombastic guitar licks and eerie snarls is the stuff of legends. Bands like Carcass and Kreator would kill for these riffs. Sonia’s evocative soloing is one her best off Echoes of the Soul. I particularly liked Fernanda’s roaring plucks on the bass strings. “Dark Night of the Soul” is probably my favorite track. The slow intro build-up helps make the song more powerful. Fernanda digs deep into her arsenal to bring up a more menacing voice. Sonia is the Mistress of the Poignant Solo as she shreds her heart out on two solos. The album closes out with “From the Ashes.”  The mosh-pit pleaser gets the blood going into overdrive. I first saw the music video two months ago, and it was dangerously fun to witness. The beasts come out to play one last time. They make it count with this song, and it ends very nasty.

As far as debuts go, Crypta is going to bite into our ears and necks with Echoes of the Soul. I really enjoyed the different themes of death they visit with each song. I just sunk my teeth into this album, and I love how it tastes. Extreme metal and death metal have gotten more vicious than before. I thought death metal got topped by Cannibal Corpse’s Violence Unimagined, but I was wrong. I got a feeling the evil stirring in this group is just beginning. To Crypta, I salute you. Horns up!!! 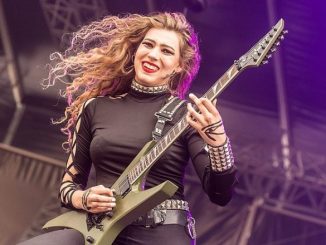 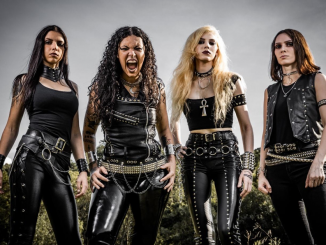