When Matt and I were invited to cover the Summer Slaughter festival in 2017, it was mainly cover Nuclear Blast’s Rings of Saturn. It was there I struck a friendship with two of its members, drummer Aaron Stechauner and guitarist Miles Dmitri Baker. The following year, they both left Rings of Saturn to venture into new music territory. At that point, they hooked up Vampire Squid frontman/guitarist and longtime compadre Andrew Virrueta to create Interloper. Unlike the death metal sound Rings of Saturn were known for, Interloper ventures into the world of progressive metal. I already knew how talented Aaron and Miles were, so I was excited to hear about this new project. It is now 2021, life is starting to return to normal, and Interloper thought it was the perfect time release their debut under the Nuclear Blast banner, Search Party. Time for me to join the search party and interlope into something new and exciting.

Search Party commences with “Pathkeeper.” Aaron is extremely swift and destructive on the kit, especially on the bass pedals. I dig Virrueta dual vocal work as a clean singer and screamer. He creates beauty in a destructive force. Miles lights up the pathway with a fiery solo. This great progressive opener lets us know what is in store. “Bound to Fall” has a delicate intro that has goes into a more subtle tone. The beat is still vicious as Virrueta screams his bloody lungs out, but he contains himself during the chorus. Both he and Miles inject lethal riffs into our veins, and I can feel it rushing through me. “Moonlight” is where extreme metal and progressive metal collide. The bass pedal action Aaron puts in the beginning wakes you up, and from there, Miles’ rapid strumming takes over your senses. The vocals Virrueta lays down for this track is as sweet as a rare red wine. “Dreamlands” is one of my personal favorites off Search Party. What really captured my attention was the dream-like state melody layered in the fierce guitar work. Virrueta transports the mind to different spectrums of pleasantry and savagery. The solo number soars and screeches to tremendous lengths.

As we move along the record, we come to “Drift.” The beat is meatier and the guitars sound has a big crunch. The melodic voice Virrueta puts in contradicts the melody of the beat, but going against the grain works for them. Aaron pounds his drum kit to death is precise quickness. The self-titled track, “Search Party,” marks the halfway point. This is fine musicianship from Interloper as they are a collective force. I was very fond of the guitar work Miles and Virrueta put together, which is both delicate and complex. It sounds like they put a touch of pop in the mix, making the song sound much sweeter. “The Wishing Well” has Aaron go postal on the drums. The frantic motion he puts into his playing is complex yet smooth. While the self-titled track slowed your heart rate down, this number sticks a needle of adrenaline right in your veins. They know how to bring your pulse down, and then kick it right up again. “Idle Years” features a folklore strum as an intro. That is a nice touch as it leads into righteous riffs Virrueta and Miles perform. With each new track, Virrueta’s voice just gets better and better. He is like Geddy Lee and Amon Amarth’s Johan Hegg rolled into one.

“Cheshire” is the album’s longest running song, clocking in at 6:30. Virrueta is gentle with his singing in the beginning while a flamenco style riff is playing in the background. Miles and Aaron dominate the rhythm section with elusive rapidness, each nailing their parts. Search Party officially ends with “Baring Teeth.” Interloper decided to go all out guns blazing. Virrueta releases the beast from its cage and he roars louder than before. Aaron performs the deadliest drumming for the album, so stay out of his way. Miles slashes through the notes of his solo with ease and cunningness. This song will bite you right in the ears. Interloper also performed a Duran Duran cover with their classic tune “Rio.” I would think they would do “Hungry Like the Wolf,” but they owned this song. Adding their progressive metal nature to the synth-pop classic, we can headbang as well as dance the night away. An interesting cover, it actually works for the group, and I hope they play it live.

Interloper is an intense progressive metal band that adds death metal, jazz, and pop in their stellar debut. Search Party is a fine piece of music metalheads will come to love. The album cover is a work of art created by Caelan Stokkermans as it captures anguish from a chaotic world. Aaron told me in an interview that he wanted create something unique with this band. I believe he has along with Miles and Virrueta. To Interloper, I salute you. Horns up!!! 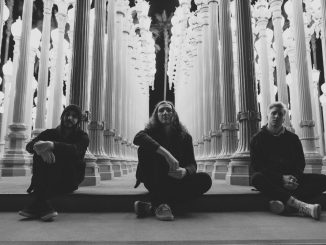