SILENT SEASON Boston’s hard hitting rock/metal band is back with intensity, rage, aggression and a lyrical journey through dealing with drug addiction in the bands new song ADDICTION. These dudes never cease to amaze me with the emotion and musicianship as they grow every year in their career.

The band was founded by Jeremy Rae (vocals) and David Pappalardo (drums) in 2008 And the full lineup gelled in 2012. Since then the guys have released a debut album entitled BREAKING ME DOWN and received rave reviews from a ton of radio stations including Sirius-XM Octane with the hit single CHANCE

With a fan base growing the guys kept  releasing singles through the years that kept leveling up each time! You can tell how passionate dedicated and driven they are to make SILENT SEASON a household name.
If you  truly want to get blown away (like I did)  then you need to take a hearty listen to the bands 2019 EP release THE WAR WITHIN, VOL 1.  From that hard hitting blast in THE NEGATIVE  to the pretty and sensational sound of STARS. These dudes know how to bring all the elements of a good rock band to the center stage each time they create a tune.
I had a chance to speak to the band about the new release ADDICTION,  the positive outlook they bring out  in their songs, the band name and where they think they improved the most as musicians.

Q: I love the name of your band can you give me the reason you decided on the name and through the years has the names meaning changed for you guys?

A: When we first started a lot of the bands that we had  played shows with in previous projects started to fizzle out. The music scene kind of fell silent for a bit and we wanted to fill that void. So we came up with the name Silent Season. I think though the meaning hasn’t changed we are still here to finish what we started.

Q: Being a boston based hard rock band what is the biggest struggle and most positive thing being in the area?

A: The biggest struggle is that the rock scene is not as alive as it used to be. Venues that used to be hot spots have closed and it’s a shame. Luckily, there’s a lot of great local acts that support each other at the shows we manage to put together.

Q: You guys have been making music since 2008 and have had a gelled band member line up since 2012. For you guys how do u get inspired to create music and what does it take to keep a lineup solid for so long?

A: Jeremy, Dave and I are the original three. The way we are just so comfortable with each other makes the writing process easier.

Q: Your newest single ADDICTION deals with a heavy lyrical standpoint which a lot of bands have covered, when you started writing this song what inspired you to touch on this subject and how did you wanna make it different from other rock tunes that talk about this subject matter?

A: We tried to make the song through the eyes of someone watching another person deal with addiction. I think it is more relevant now than ever with people being so depressed about covid and life shutting down. A lot of people chose to use again because of all that. We just wanted to shed some light on that and let people know they can get help and are not alone.

Q: The one thing I love about ur music is you bring out the positive and try to help people through struggles is that something on a personal level you strive to do and also if you do on a personal level how does that differ then putting it to music?

A:  I think growing up as a kid there were a lot of bands talking about some pretty dark subject matter. People can relate to that, but they also want to know that they can overcome all the crap that life throws at you. It was important to us to make it known that even though life gets tough there is always something you can do to make it better.

Q: What is the biggest improvement as a musician you think you have had since the beginning of the career as SILENT SEASON?

A:  For me, I have gotten into recording and mixing, which helps when you have an idea you have to get down before you forget. And also, I’ve gotten into a lot in the live perspective. For example, when we play live, I handle our rack which handles our mics, in ear monitors, click tracks, samples and light show.

Q: Do you guys have new music as in a EP or full length coming out in 2021 or do.you feel the single releases are the way to go in this current music world? And how do you view both ways of getting music out?

A: With the way things are being an unsigned band we are currently just focusing on singles.

Q: What is the biggest thing you guys have missed in a live show atmosphere and why?

A: The crowd/fans. The way they react to the songs and the conversations we have with them after the shows. Many tell stories on how the music helped in some way. It’s really rewarding in a way.

Q: Do you have local shows gearing up or tours coming your way for the end of 2021?

A: We are starting to put together some shows now that things are getting back to normal. TBA!

Q: What does it mean to you that people take the time to listen and connect to your music?

A: Honestly it means the world to us. I’m pretty sure that if it wasn’t for the listeners this all wouldn’t be worth doing all these years.

Q: Anything else you want to let people know about your band or new stuff coming soon?

A: We are always making new music so don’t be surprised if you start to hear about the next single sooner then later! We are always on social media so stay tuned on there for any announcements. 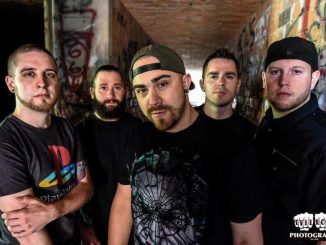