Duo project from artists Brent Smith & Zach Myers of Shinedown, Smith & Myers, have released the official music video for their single “Bad At Love” – PRESS HERE to watch. The pop-rock track, which is off the duo’s album Smith & Myers Volume 2 and has garnered nearly 6 million global streams, is a vulnerable and personal song about the difficulties of staying in a romantic relationship when you have a gypsy heart that is now impacting Hot AC radio nationwide.

Smith & Myers, a music project that initially started as a happy accident six years ago, released their double album, Smith & Myers Volume 1 and Volume 2, in 2020 via Atlantic Records. Both volumes showcase the duo’s ability to pack power and soul into songs created with nothing more than a microphone and an instrument or two, highlighting their sonic versatility throughout a mix of poignant original songs and unexpected covers such as Neil Young’s “Rockin’ In The Free World” (Vol 1) and Billie Eilish’s “Bad Guy” (Vol 2). With just a soul-shaking vocal and an instrument or two, Smith & Myers transmits powerful lyrics and indelible melodies encompassing vulnerability, fearlessness, honesty, outrage, love and understanding.

Smith & Myers illuminates the depth of Brent and Zach as a duo and showcases a very different yet just as intriguing musical side of these two versatile artists. As one-half of multiplatinum band Shinedown — who were recently named #1 on Billboard’s new Greatest of All Time Mainstream Rock Artists chart — Brent and Zach can often be found topping the rock charts, earning mainstream recognition, and playing to sold-out arenas around the globe with 10 million albums and 10 million singles sold worldwide, amassed 14 platinum and gold singles, five platinum and gold albums, more than 2.7 billion streams and 16 number one rock hits (breaking the record for the most ever #1s in the 39-year history of the Billboard Mainstream Rock Songs Chart with their single “Atlas Falls”). 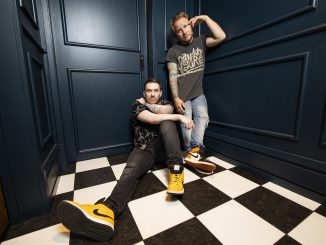