Well, with national acts slowly starting to tour again, you can imagine how excited I was when it was announced that the infamous Cypress Hill was coming to El Paso on 9 August at none other than the El Paso County Coliseum and to add to the excitement, it was going to be an outdoor show. I believe it was held outdoors simply due to the pandemic, indoors the coliseum holds close to six thousand, but I’m not alone in saying the show outdoors was a pleasant surprise.

Not to get into much detail, but I had to jump through a couple of hoops to get approval to cover the show. deniels are part of the game as a photojournalist, but with this particular situation, I ended up on the list with credentials.

I arrive at the venue just before sundown, I’ve been watching the weather and for good reason, there’s a storm moving in from Juarez, Mexico, which is just across the street, literally. But so far so good, cloudy and a nice breeze, perfect for an outdoor show, or so I thought.

Cypress Hill, what can I say? Formed in the late 80s, first album in 91 to be followed with 8 more over the past 27 years, not to mention, 20 million albums sold worldwide and in 2019, received the star on the Hollywood Walk of Fame, a first for any Hip Hop group.

Straight outta California, labeled as West Coast Hip Hop, headed up by Sen Dog and B Real. I’ve had the pleasure of being part of interviewing these two back in 2015 at the Neon Desert Music Festival here in El Paso, Mr. Colt DeMorris, the CEO of the West Texas Chapter of Normal conducted the interview, needless to say the format was all about cannabis, seeing the boys are advocates for medical and recreational use of marijuana in the US, oh yeah, they’re all about the weed.

As I wandered about the festival grounds, I noticed that the crowd was really not my type of crowd I was normally use to, these in attendance were slightly older, latino or should I say, a hip hop, lowrider, plaid shirt top button buttoned kinda crowd, and as it should be, we are all about to witness some ole school hip hop.

Opening the show was a DJ called Z Trip, again, ole school DJ, scratching those records and warming up this crowd. Next on deck was Atmosphere, I had shot him years ago at the Texas Showdown Music and Tattoo Festival, ironically at the same venue back in 15.

He kept the crowd entertained for over an hour with his brand of rhymes and hip hop, I must say, he’s super talented and fun to watch.

Ok, now for the main event, what we’ve all been waiting for, but wait, it’s starting to sprinkle.

Let me paint the picture for you, I’m up front by the gate that allows me backstage, no cover and the car is parked a mile away, it starts to rain harder, I have two cameras and they do not mix well with water, backstage I go, I find a tent to get up under and for the next 30 minutes, myself and a stagehand share this little piece of paradise, I’m good and gear is staying dry.

My mindset is they will call the show on account of the weather, but just like that, it stopped.

Stage hands are squeegeeing the water off the stage, it’s pouring between the monitors and into the pit, ok that’s cool, I guess the show is still slated to go, but here it starts again, but not that bad this time and to our delight, Sen Dog hits the stage followed by B Real, cutting into classic hits such as How I Could Kill A Man, I Ain’t Goin Out Like That, What’s Your Number and of course. Insane In The Brain.

I shot my allotted time from the pit and moved into the crowd continuing my coverage, the crowd was ecstatic and the scent of marijuana was in the air, I love to see people having a good time, singing and dancing the night away to some of the best hip hop in existence, Sen Dog and B Real had the audience’s undivided attention, it’s as if they were tag teaming them, you gotta love it.

In closing, I’m so glad shows and tours are somewhat starting up again, it’s been a minute, but you knew that, case in point, thousands stood in the pouring rain until it stopped, that tells me how starved we are for live shows and I’m right there with you, glad it worked out as it did. 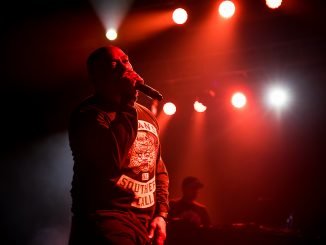