Back in 2012, I ran into this metalhead named Tyler (not Rockaholic) and we bonded over our love of heavy metal. We would share music with each other, and that was when I was introduced to Mastodon. The shredders of the Atlanta scene really changed my perspective of how heavy metal can sound because they are full of innovation. From progressive metal to sludge, hardcore, stoner, and alternative, Mastodon has been at the top of the creative pyramid for over 21 years. They topped themselves when they put out Emperor of Sand back in 2017, which resulted in their first Grammy win. However, the heavy metal maniacs of the ATL look to top that with their eighth release, Hushed and Grim. Dubbed their heaviest record yet, I have to hear this album for myself.

Hushed and Grim begins with “Pain With an Anchor.” Brann Dailor is steady and swift with the double bass pedal as his jazz-like drumming wakes up. The tone is dark and somber with a subtle touch of doom. Bassist Troy Sanders adds this thunderous bass lick towards the end of the song that makes it obscurer, which is something I like. Brent Hinds crushes the first solo of the album as his riffing oozes 70s dirty rock. “The Crux” puts progressive metal into overdrive. I love the tenacious riffs rhythm player Bill Kelliher plays. Sanders’ vocals are raunchy and haunting at the same time. I love how eerily dirty he can make the lyrics as he steps up to the microphone. This snarling track is a great one to hear. “Sickle and Peace” is very hypnotic as the stoner metal sound draws the listeners in. Sanders is seductive with his voice as well as his bass. Kelliher does a stellar job performing a mixture of psychobilly and alternative metal riffs. What really did it for me was the screeching, distorted solo played exquisitely by Hinds. Next up is “More Than I Can Chew.” The intro features a symphony-like melody that suddenly departs for heavy riffs. Dallas and Sanders are a menacing match made in rock ‘n’ roll heaven as they sung their balls off.  The lyrics really grasp the concept of stress and anxiety, as we all felt these past couple years. “The Beast” is where Hinds shines as a singer. He brings a Southern drawl, which I feel gives the song more soul. Blues rocker Marcus King comes in and lays down a scorching solo that screams neo-soul and Southern rock. This is a tune dealing with loss, and Mastodon brings the sorrow into the light.

“Skeleton of Splendor” is austere and melancholy as the vocals draw out despair. Mastodon display their ability to push the envelope of their artistic minds. The tone reminds me of a mid-tempo version of Pantera’s “Cemetery Gates.” If the group ever wanted to write a ballad, it would sound like this. “Teardrinker” is the 2nd single off Hushed and Grim. I thoroughly enjoyed hearing the different concepts of hard rock and heavy metal. At the beginning of his solo, Hinds performs a spacy riff that are a while, he starts to go postal. To me, he is an un-sung hero of metal guitarists. We reach beyond the halfway point as we listen to “Pushing the Tides.” The first single off the album, and it is a testament to where the band was head. Slick and passionate, Sanders and Dailor play off each other’s strengths as they ravage the beat with intensity. I absolutely love this song. “Peace and Tranquility” is full of emotion. The intro is a thrash metal mecca as the group mixes it with an ominous stoner groove. Hinds’ solo feels very personal, as it sounds similar to what Tony Iommi would play in Black Sabbath. Lyrically, the song is pure poetry as it deals with finding peace in death. This is one of the best off the album. Mastodon goes psychedelic with “Dagger.” The bass intro Sanders performs pulls you into the song like a moth to a flame. They pen a terrific song that deals with picking yourself up and moving forward after finding peace with a loss. It may have a heart-retching sound, but the mood is hopeful.

“Had It All” continues the group’s direction with creating ominous metal, but like the previous song, it is a message of comfort and faith. Mastodon goes a bit grunge with this tune thanks to the stellar solo performed by Soundgarden’s Kim Thayil. If anyone knows about loss and moving forward, it is he. I love the musicianship on here as it is tight and touching. Even Sanders own mother plays the French Horn on this song. Way to keep it in the family. We now approach “Savage Lands.” Dailor is raging inferno on the kit as he fires up the engines. This song has the classic Mastodon sound, which includes blistering riffs, scruff-sounding vocals, and thought provoking lyrics. Kelliher kills on the main riff while Sanders adds his far out stoner bass lines. “Gobblers of Dregs” is one of the band’s heaviest songs yet. This eight-minute epic tune has Kelliher go in different musical directions, from progressive to doom with a dash of sludge. Dailor is a true showman while Sanders a roaring beast. Hinds provides a true gem of a solo. It just comes from a completely new spectrum that I cannot begin to describe. This song is amazing. “Eyes of Serpents” has a very eerie intro just before the guitars blast off. This sludgy, alternative number has a dream pop melody that is very gripping. It worked for the Deftones, so Mastodon experimented with it and it work well for them. Hushed and Grim closes the doors with “Gigantium.”,” Mastodon showcase everything they have done on this record is a grand way. Hinds’ solo soars higher than anything he has done before. It is full of thunderous bass lines, crashing drum work, and majestic riffs. I cannot think of a better song to make an album come full circle.

How does describe Hushed and Grim? One word…AMBITIOUS! Mastodon went beyond the scopes of what they know and created their heaviest record. I am not just talking about heaviest in music, but emotion as well. This album deals with grief and finding the strength to make peace with that grief. Their long-time manager Nick John lost his battle to cancer in 2018, so this record was an embracement of what the group lost and how to move forward. Produced by David Bottrill, who worked with Rush, Muse, and Tool, his eclectic style meshed well with the band’s spontaneous brand of metal. Like a fine red wine, this band gets sweeter the older they get. To Mastodon, I salute you. Horns up!!! 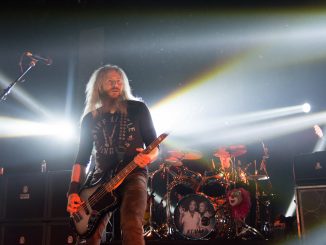