Hollywood taught Johnny Skulls and Dax Dabs lessons and made them see how they value their own creativity and point of view. The west coast helped them get music out and had them growing as musicians but in 2019 Johnny-vocals and Dax-guitar came home to Boston, Massachusetts  and put together a new project named ABOVE SNAKES. Music that glistens with nu metal rock/rap elements, to the melodic radio rock flair and sensuality. One listen to new single NOTHING TO LOSE you will hear the anthem like inspiration of doing things on their own terms and showcases the music they grew up with and shaped them into the musicians they are today. The track that got me inspired is the band’s first single ADRENALINE with its feisty edgy rock sas!!  It’s uplifting, vibrant and gets you moving. Every single they have produced so far has had so much diversity that it makes for a good listen and your always anticipating what new sound or curve ball the band is going to do next.  I FEEL BAD bleed with a balladesque rock sensation and NEVER ALONE send out the driving melodic rock flair that radio stations would eat up. All in all ABOVE SNAKES is doing things that they love; they have the passion for great fun music and can’t wait to see what 2022 has in store for them

I had a chance to chat with the guys about working with Zach Williams of Dead Eyes, the meaning behind new single NOTHING TO LOSE, the unique band name and much more

Before we get into your band tell me what did music do for you that made you want to pursue a career in this industry?

DAX: Honestly just growing up in the local Boston music scene playing in bands since we were 13, growing up with MTV/TRL in the early 2000s when they would feature bands like Limp Bizkit, and Korn, Seeing the larger than life rockstars on TV and in person at festivals like Ozzfest, it instantly became a dream, especially when we started touring early in our career, we found being on the road is where we needed to be full time! Nothing like waking up in a new city every day!

You guys were Hollywood artists for some time then you moved back to Boston in 2019. This two part questions is when you moved west were all your expectations met being in the area where “music comes alive”?

Johnny: I moved out to Hollywood thinking it was still like it was in the 80s on the sunset strip, but that was definitely not the case! However, going to places like the rainbow room, the Roxy and the viper still had that nostalgic feeling so I’m glad I got to live that for a bit!

And part two, what kind of culture shock was it moving back to Boston and how has the transition been?

DAX: Coming back to to the cold weather and snow was a big change, But were so used to it we embraced it with open arms, and it was good to be back in Boston away from the egos LA had!

ABOVE SNAKES is a unique name for a band how did that come about?

DAX: Speaking of the Egos in LA, We got tired of playing for other people and doing it their way, these types we refer to as snakes, and we rise above that shit! It also has a double meaning, with a snake also meaning something you’re going through like Cancer, or dealing with a bully at school.

I read also you both woke up one day deciding that you were going to do music on your terms and your new single NOTHING TO LOSE kind of releases the anthem of being unapologetically yourself and living your life your way. Do you feel people these days are missing that aspect with the social media platforms and feeling they need to compare themselves to others?

DAX: We’ve seen that type of stuff on social media for sure, and its pretty dumb honestly! Everyone trying to be like someone else or compare themselves. Be YOU! Be unique and fuck what other people think! like the lyrics say in “NOTHING TO LOSE” – “You can hate me, think your gonna change me, but I’ve got nothing to lose”

On NOTHING TO LOSE you guys kick it back to the old school rap style, a little different from your other songs that I have heard. What prompted you to even play with this idea and how fun was it to get that vibe going again?

Johnny: We grew up on that nu-metal / rap rock sound! Bands like Limp Bizkit, Papa Roach, and Linkin Park really influenced our childhood and to this day, still are bands we love bumping!! With each song, we try to do something new each time, staying the same is just plain boring!! We don’t play it safe, and we do it our way!

You co-wrote the song with singer Zach Williams of DEAD EYES. How did that friendship happen and what did he bring into the song you guys were missing or you’re learnt or helped in your creativity of songwriting?

DAX: Zach is a super rad dude! We met him when we went back into the studio with Producer Kile Odell who also co-wrote,produced and mixed the track in Nashville! Both super creative people! We look forward to working with them again!

You guys have a high energy musicality to you, which also shows in your live shows in this day and age what do you think is the biggest thing a band needs when looking into branding themselves and once you do have that signature sound or “thing” about you how do you keep it authentic through the years?

DAX: We love bringing that high energy 24/7, positive vibes all around while having no ego! As We’ve mentioned a few times in this interview, just be yourself while also standing out from the crowd, thats how you stay authentic through the years!

I usually pick one of my favorite tracks to ask you about but all the singles I have heard from you I can’t pick one to ask you about, so I want to know what song are you most proud of writing (excluding the newest single)  at this point either NEVER ALONE, I FEEL BAD or ADRENALINE and why that song?

DAX: I would say Adrenaline since it was the first release for the band. We worked super hard for years getting this band together so once we finally had a single debut, it was such a great feeling!

Have you guys been working on a full length or you just content with singles being released?

Johnny: We have been working on an EP, which we plan to drop early next year. But I can definitely tell you we have another single coming and were super excited for it! We’ve already shot the video for it and it looks insane!

If you are working on a full length album how much more diversity are you creating for the album and will you be recording it in Nashville like you did with the latest single?

DAX: 100% will be back in Nashville! No one beats Kile Odell’s mixes!!! He just mixed and produced The new Nita Strauss Record with the single featuring David Draiman of Disturbed and it BUMPS!!!

Your artwork for the singles also are very artsy and interesting are you guys a part of that and who has done the work on them and do you hope people make a connection from the songs to the artwork?

DAX: Yes we are very much so a part of all the art. Everything you see is our vision down to every little detail, and all drawings were done by an Artist in Indonesia. With our music videos, we also design and build all the sets and clothing, along with co-directing and writing the treatment. We try to be as involved as possible with everything we do, another reason this band would be on our terms, not taking orders and not listening to anyone else, we never settle!

Johnny: While we are actually planning a lot for 2022, we currently don’t have anything booked for the rest of the year, but you can expect more new music from us around the corner!

3 unique facts about the band or the band members?

1. Previous to this band I was always a drummer.

2. I design and make custom clothing and my company is called Black Label Kin.

3. Dax & I own and run a huge recording studio complex in Reading Ma called The Warehouse Recording Studios! We do everything from recording, production, mixing, photography, music videos, and lessons! www.thewarehouserecordingstudios.com check it!!

Any last comments or anything you want to tell your fans or newcomers reading this?

Thanks to everyone who has been bumping our newest single “Nothing To Lose” online and on radio stations across the country! We are super grateful and beyond stoked for almost 50,000 views on youtube in under a month! If you’ve never heard of us, check us out! Were loud, obnoxious and don’t play it safe! 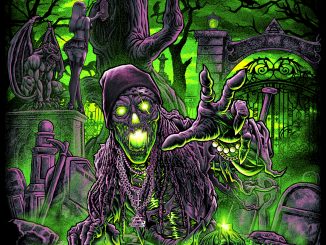