I know that frontman Tommy Vext has been around the metal scene for over 20 years, but I did not know of him until he formed Bad Wolves. It was from that group that I saw the charisma and ferocity he had to offer. After two successful albums with Bad Wolves, he departed the group due to differences in his beliefs with the rest of the band, according to him. Luckily for him, he decided not to let “cancel culture” get him down or cancel him. He decided to embark on a solo tour with country rap artist Struggle Jennings. Dubbed the F*ck Cancel Culture Tour, Vext’s last stop was a venue that I have been wanting to check out ever since hearing about it, the Garden Grove Amphitheater. It is an outdoor venue just outside Downtown Garden Grove. I got to the venue in time to catch the last few minutes of Jennings, and I have to say he was not all that bad. After being introduced by UFC Hall of Famer Tito Ortiz, the festivities began.

Right out of the gate, Tommy Vext burst out of the backstage area and cranked up the volume in Garden Grove. For a big guy, he was very versatile on stage. He performed with a powerful voice that was both melodic and harmonious. There were times where Vext screamed his lungs out, and the fans ate it. His band were made of superb musicians who were able to capture essence of Vext’s style. Bassist Kevin Creekman cranked out stellar bass lines while representing himself as an inspiration for positive body change. No band would be complete without an impressive guitar duo of Dusty Boles and Neil Swanson. While Boles swooned the crowd with rhythmic riffs, Swanson dazzled us with passionate solos and smooth licks. Drummer Michael Levine round out the band with his bone-crushing whamming. Vext has put together a fine selection of top-notch players who play fine rock ‘n’ roll. For a good hour, he performed a tasty selection of tunes from his Bad Wolves days as well as covers. When he went into “Better Off This Way,” he brought out Dorothy frontwoman, Dorothy Martin. Together, they crushed. Along with “I’ll Be There,” “Tennessee Whiskey,” “Killing Me Slowly,” “Sober,” “The King,” “Remember When,” “Hear Me Now,” and “No Messiah,” the evening was filled with passion that lifted our weary spirits for the Holidays. Vext brought the house down with The Cranberries’ “Zombie” and Linkin’ Park’s “Crawling.”

Garden Grove came alive for heavy rock ‘n’ roll. Vext may be outspoken today for his right-wing views, but no one could deny that he is one of the best (yes Scott Coonan, I said it so shut up! LOL). He was very caring to the crowd that at the end of one of his songs, he stopped the show to make sure a fan that fainted was okay. This is something Travis Scott would not do. It was also fun to see American pride being promoted. I am glad to make this show, and I look forward to see what Vext has up his sleeve next. To Tommy Vext, I salute you. Horns up!!! 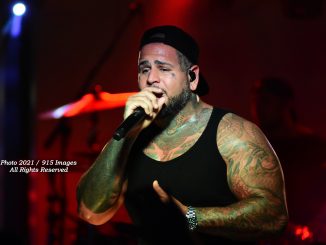