When you think of some of the greatest artists to write love songs, who comes to mind? When you want to cuddle up with your special someone, whose music do you put on? Could it be some Elvis, The Beatles, The Temptations, Rod Stewart, Dolly Parton, Whitney Houston, Diana Ross, Lionel Richie, the list could go on and on. But one name that may not come to mind for most people is Doyle. These masters of Horror Punk may play riffs that sound heavy, and get the crowd running in circles, but deep down the lyrics are about love. Doyle had so much love to bring to the Whisky a Go-Go, that they decided to do a double headlining date. Brandon & I were fortunate enough to join the sex-capade during its second night.

Stomping onto the stage was the Man, the Myth, the Legend. Doyle Wolfgang Von Frankenstein, the axe man of Doyle. No matter how many times I have the opportunity to see this man live, his stature and bulging muscles are always a sight to behold. Doyle was ready to make love to the crowd with his screaming guitar sound ripping through the opening number “Kiss me as we die.” Doyle could be felt by his adoring fans slamming his fist on his guitar. Fronting this cavalcade of sexy chaos was Alex “Wolfman” Story. Alex appearing to be into the kinkier side of love making, stepped onto stage donning a Luchador mask. Though the mask could come across as a gimp mask, Alex would romance the crowd between songs by reminding them that this next one “Is a bit of a love song. Something you can dance to,” before unleashing the fury of the Wolfman through the mic on songs like “Dreaming Dead Girls” & “Mark of the Beast.” Not to be outshined, bassist Brandon Strate performed shirtless alongside Doyle. Letting his jet-black hair flips tantalize the audience. While his pentacle chest tattoo told the crowd he wasn’t afraid to get rough with them. Rhythmically pounding away in the back was drummer Wade Murff. Something you can always enjoy from a drummer is that they are going to be good with their hands, and never fall off rhythm. Some of the other love songs Doyle serenaded the crowd with were “Learn to Bleed,” “Headhunter,” “Bloodstains,” & “Dark Gods Arise.”

Taking the crowd on a darker kind of sexual journey, filled with depravity and lust. The crowd was yearning for more at the end of every song. Doyle was more than happy to oblige the crowd and take them on a trip down their love road. Ending their set with “Run for Your Life,” Doyle gave us one last pump of everything they had. Then like a Frat Boy during a one-night stand, they left the stage with no goodbye or farewell. The lights came on, and we were all left standing there, covered in sweat and in our sin from the encounter we just had. 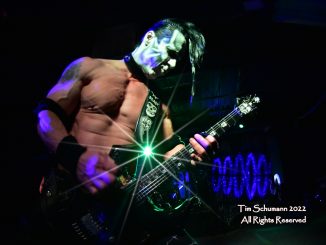 Doyle As We Die World Tour 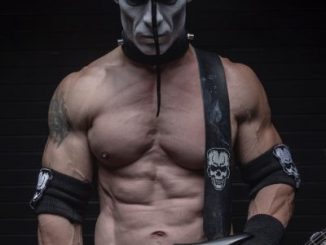 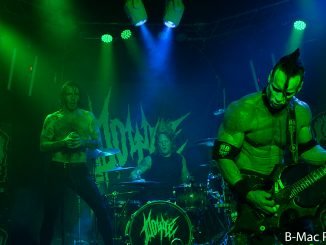 Doyle and Scurvy Kids Bring Holiday Horror to the Whisky