One of the last shows I saw at the House of Blues in Anaheim before the pandemic shut down the world included Stick To Your Guns, Motionless in White, and of course, Beartooth. The ferocious yet melodic hardcore metalcore outfit from Columbus, Ohio, has been making a name for themselves since the release of their 2014 debut, Disgusting. Full of rage and charisma, Beartooth had me the moment frontman Caleb Shomo burst the first set of lyrics out of his malicious throat. Last summer, they released their biggest hit record to date, Below, and fans were aching for them to hit the road again. With the world starting to return to normal once again, Beartooth announced they would be journeying across the States with Erra, The Devil Wears Prada, and Silverstein. Dubbed The Below Tour Part II, their adventure included them performing once again at the House of Blues in Anaheim not once, but twice. Rabit and I went to second show, and the atmosphere was anything but tame.

Starting off the night was progressive metalcore greats ERRA. I cannot tell you how many times I have caught them, and they just seem to get better each runaround. Performing almost exclusively from their 2021 self-titled album, ERRA, they once again showed off their evolving technical skills while experimenting on the progressive metal vibe they are known for. Frontman J.T. Cavey has really stepped up his game ever since taking over. He reaches down deep into soul to belt out aggressive screams while lead guitarist Jesse Cash wins over the Anaheim crowd with his harmonious singing. Not only that, but he was also whipping out tasty solos while touring guitarist Clint Tustin laid down the main riffs with ease. Bassist Conor Hesse and drummer Alex Ballew are an efficient duo, providing the pulse to the beat that gives ERRA its power over the fans. From “Gungrave” to “Divisionary,” “Night to Silence,” “Scorpion Hymn,” and “Snowblood,” ERRA were the pride of Birmingham, Alab., that night. Of course, their night would be complete without performing “Skyline” off Drift. They did their job and lit the fires underneath everyone.

Following ERRA was the metalcore outfit that gives Christian metal a sense of style and playfulness, The Devil Wears Prada. Last time I saw these guys was when they opened for Parkway Drive at the House of Blues in Las Vegas over Labor Day weekend in 2018. The boys of Dayton, Ohio, got their evening off to a hellacious start with their recent single, “Watchtower.” Frontman Mike Hranica continues to be a dominating force on stage, roaring and screaming with malice. Rhythm player and co-lead vocals (clean) Jeremy DePoyster hit every note on the mic and guitar with such dexterity. The person I could not keep my eyes from for some of the night was keyboardist/synthesizer Jonathan Gering, headbanging the night away while hammering down on the ivories. Drummer Giuseppe Capolupo officially joined The Devil Wears Prada in 2019 after a few years as their session player, and his presence was thrilling behind the kit. Lead guitarist Kyle Sipress was impactful with the lead riffs and righteous solos. The Devil Wears Prada performed a mixture of their best stuff that included “Danger: Wildman,” “Termination,” “Chemical,” “Dez Moines,” “Sacrifice,” and “Dogs Can Grow Bears All Over.” They brought glory and majesty to their set, and the crowd praised it with mosh pitting and crowd surfing.

Up next was a band that has been causing a stir with their mixture of screamo, post-hardcore, and even emo. I am talking about of course Silverstein. Originating from our neighboring country of Canada from Burlington, Ontario, I have been told these guys put on a hell of a show. As soon as they started off their set with “Bad Habits,” eyes and ears were glued to their bellicose yet eclectic style of heavy metal. What stood out to me the most was frontman Shane Told’s exceptional showmanship. He feeds off the adrenaline of his bandmates playing, whether it is something peppy, heavy, or somber. Rhythm player Josh Bradford, bassist Billy Hamilton, and drummer Paul Koehler fill the room with zesty rock music that is just heavy enough to start moshing and crowd surfing. Lead guitarist Paul Marc Rousseau brings a certain alternative swagger to the lead riffs that is part emo and part hard rock. During the song “Bankrupt,” Beartooths own Caleb Shomo snuck on stage to surprise Shane Told by accompanying him on vocals. Promoting the release of their tenth studio album, Misery Made Me, Silverstein made screamo sound so joyful. With songs like “Vices,” “My Heroine,” “Retrograde,” “Ultraviolet,” “Smashed into Pieces,” “Massachusetts,” and “It’s Over,” the House of Blues became both a madhouse and funhouse at the same time. Silverstein brought great energy to their set, and they closed their night with their all-time classic that brought the house down, “Smile in Your Sleep.”

After enjoying happy hour with Silverstein, it was time to get serious and aggressive again. The house lights turn off, confetti shoot out of the cannons onstage, the TV monitor goes on, and out comes Beartooth, attacking the audience first with “Below.” Shomo stood tall, proud, and dynamic as he sang/screamed his heart out. The energy he put out at the House of Blues was amazing to watch, pumping up the crowd and driving them to mosh ever more intensely than when they opened for Motionless in White back in Feb 2020. Lead guitarist Zach Huston was dominating the lead riffs the whole night, while rhythm player Will Deely impressed the crowd with his tasty licks. While Deely is still new guy (officially joined in 2021), the way he handled the beat makes him look and sound like a Beartooth vet. Bassist Oshie Bicher and drummer Connor Denis were monstrous on the beat, tearing into the flesh of the music with penetrating ferocity. As mentioned before, the TV monitor behind them was playing intriguing visual art that would flow with the beat of Beartooth’s music, making the show even more euphoric. Besides Below, the band had a great collection of top-rated songs the metalheads of Anaheim sunk their teeth into like “Devastation,” “Aggressive,” “Hated,” my favorite “Fed Up,” “The Lines,” “Beaten in Lips,” “Afterfall,” “Skin,” “Phantom Pain,” “Bad Listener,” and “In Between.” Following a quick breather and hearing the encouragement of the house, Beartooth went back out for the kill with a 2-song encore, “The Past is Dead” and the instrumental somber tune, “The Last Riff.”

Following “The Last Riff,” the Anaheim crowd started to head home feeling exhilarated as they did let out their bellicosity at intense levels. Every band on the bill brought their unique style and that is what made the show even more exhausting. Between hardcore punk and metalcore/screamo, this adrenaline-filled night was exactly what the doctor ordered. Beartooth outdid themselves from the last time they were at the House of Blues. Their new album may be titled Below, but they were riding high that evening, and I look forward to their next show in the area. To Beartooth, Silverstein, The Devil Wears Prada, and ERRA, I salute you. Horns up!!! 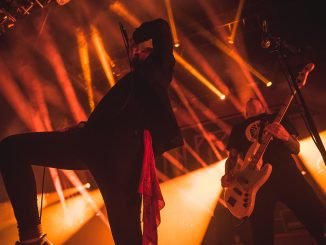 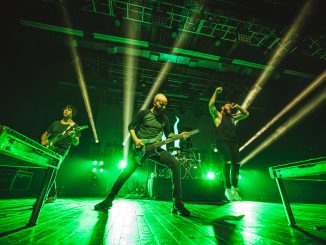 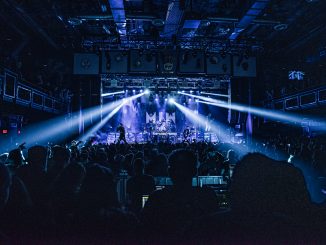